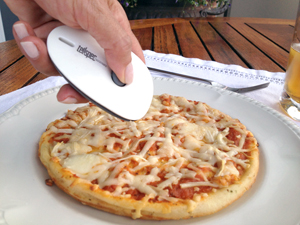 When Isabel Hoffmann’s daughter got sick, she had to make a lot of difficult decisions.

With her child bedridden for more than a year because of severe food allergies, Hoffmann quit her job as CEO of a technology company to care for her daughter. When she found her daughter was also allergic to the mold in the house, they moved.

After a year of tackling the problem, her daughter was better and Hoffmann’s next choice was much easier. She decided to develop the world’s first handheld device that scans food for nutrients, calories, allergens, chemicals, identifies sensitivities and toxins, and spots potentially harmful ingredients.

“The inspiration was really my daughter,” she says. “There are many, many people out there like my daughter suffering from all sorts of allergies like food dyes and gluten, to name a few. It became important to figure out how one could build a device that actually could help people like her.”

She set out to create the “true Internet of food” after convincing her longtime friend and colleague, Dr. Stephen Watson, to help. Spectrometers have largely been big, bulky and expensive instruments ill-suited for a small handheld device but Hoffmann found numerous companies building spectrometers on a chip, including one in the Toronto area. The hardest part was devising an algorithm to make sense of the data. “The uniqueness to this is not really the spectrometer,” says Hoffmann. “The uniqueness to us is the way we actually analyze the data because that’s what people are not doing.”

After food is scanned by the device, the data is sent via Bluetooth to the user’s smartphone. Once the smartphone receives the digital spectrum of the food, it transmits it to the TellSpec analysis engine in one of our servers, which processes it, compares it to reference spectra, and runs a complex 50,000-line algorithm on it. The output is interpreted through a large database, and information about the food is selected and customized for the user. The smartphone then downloads the information from the server and displays it to the user. “The uniqueness we have to offer is we’re able to get a fingerprint from the mixture of the food,” says Hoffmann.

Instead of seeking private funding, Hoffmann and Watson put Tellspec on Indiegogo, a crowd funding site. This has the added bonus of data gathering. “We’re not just raising money, we’re actually getting people to use our Tellspecs and to do scans and every time they scan it benefits everybody because our algorithm is learning from what they scan,” says Hoffmann.

Those who order the Tellspec now on Indiegogo will receive the product by next summer with it on the market for consumers by the end of 2014.