RESEARCH COLLABORATIONS BETWEEN ACADEMICS, INDUSTRY AND GOVERNMENT IS CHANGING THE DAIRY INDUSTRY 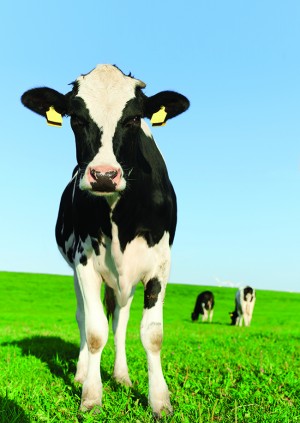 Scattered across the Canadian countryside from Vancouver Island to Logy Bay, Nfld., are nearly 13,000 dairy cattle farms that are home to just over 960,000 dairy cows. A typical dairy farm in Canada is a family-owned operation with a herd of about 77 Holstein cows.

Dairy is one of the top two agricultural sectors in seven provinces and contributed $16.2 billion to the GDP in 2011, according to the Dairy Farmers of Canada (DFC). The DFC is a farmer-funded organization with a mission to promote and defend the interests of dairy producers while also ensuring an economically viable environment. The organization acts as a unified voice for the sector.

“Dairy Farmers of Canada brings together all dairy farmers across Canada and is responsible for the lobbying, policy and promotion of dairy products,” says Shelley Crabtree, the communications officer for the Dairy Research Cluster, a research initiative funded in part by the DFC.

The collective success of the sector is, of course, sustained by the hardworking men and women who rise early and head to their barns and jobs at the processing plants each morning, but it’s also due in part to the efforts of organizations like the DFC, the Canadian Dairy Commission and Agriculture and Agri-Foods Canada who are collaborating to better the sector with programs like the Dairy Research Cluster.

“The cluster is streamlining industry research priorities. It’s bringing together 15 universities, eight government research centres and over 100 scientists,” says Crabtree. “This research is for improving and innovating dairy farms.”

Investments in dairy research can help to improve on-farm practices, market development, and product innovation, all of which contribute to a healthy and sustainable dairy sector. Research advancements could have long-term impacts and improve not only the quality of milk, but also Canada’s reputation as the top dairy producer in the world.

For the Farmer
It’s 6 AM and Dave Taylor’s been doing chores in the barn for over an hour. He has 120 milking cows at the farm located in the Comox Valley on Vancouver Island and with his father now retired, the success of the business is in the hands of both Taylor and his brother. “We’ve had 10 calves in the last seven days so it’s been pretty busy around here,” he says.

In addition to running the farm, Taylor is also the chairperson for the BC Dairy Association (BCDA), a group that provincially promotes milk through marketing and education. The BCDA also acts as a lobby organization for provincial dairy producers, and each of the provinces have their own organization that represents their specific concerns. “We meet with government and position dairy farms before them so they can get to know our sector. It’s important that they are aware we’re small businesses trying to contribute to the Canadian economy.”

While the provincial lobby organizations work to improve the local sector, the Dairy Farmers of Canada acts as a collective voice of the nation’s farmers. It is also one of the biggest supporters of dairy research. Starting in 2010, the DFC along with the Dairy Research Commission and Agriculture and Agri-Foods Canada began investing in a new program called the Dairy Research Cluster which was launched as part of the Canadian Agri-Science Cluster Initiative.

The first half of the initiative, which ran from 2010 to 2013, focused on innovative health and nutrition as well as sustainable development. “The objective of these research clusters is to bring together some of the best scientists in the country and have them work together and focus in on some of the major themes,” says Crabtree.

Close to $12 million was invested in the Dairy Research Cluster with Agriculture and Agri-Foods Canada pitching in $7.5 million, the DFC contributing $3 million and additional funding coming from the CDC and Natural Sciences and Engineering Research Council of Canada. A total of 48 research projects received funding and each focused on specific concerns that could offer tangible benefits. For example, researchers at Laval University looked into the reduction of sodium in cheese while Dr. Carol Henry at the University of Saskatchewan studied the impact of removing chocolate milk from schools on student’s overall nutrient intake.

“We had great results coming out of areas like lifecycle assessment, milk production and animal health and welfare,” says Crabtree. “There are some really fantastic results in animal care and the continuation of which in phase two will bring to light a lot of tools we can deliver to farmers.”

Twenty-three projects are included in the second phase of the program, Dairy Research Cluster II, which runs from 2013 to 2018 and will receive a total of $18.8 million in funding. The overall objective is to promote the efficiency and sustainability of Canadian dairy farms, grow markets and supply safe, high quality products. Crabtree says that innovation is nothing new to farmers who are keen to learn about progressive technology and research.

“Dairy farmers have been investing in research for several decades now,” says Crabtree. “It’s always been a part of their program: to innovate, get better, be more efficient on farms and produce the best milk possible.”

Drink Up
What if we had the potential to build better cows? To develop an animal that is stronger, taller in stature and possesses all the qualities of an ideal dairy cow? We do.

“It’s called traditional selection and it’s been done for the last 50 years or so,” says Dr. Filippo Miglior, chief of research and strategic development at the Canadian Dairy Network. “You choose your best animals and select them to carry on the next generation. In every generation we can make improvements because we’re choosing the animal with the best genes to carry that trait on.”

Although traditional selection isn’t new, Miglior and his research partner, Dr. Milena Corredig, are hoping to build on this concept to improve the milk’s nutritional quality and to do so they are using existing dairy infrastructure and technology.

Canadian milk goes through rigorous testing on a regular basis to ensure its safety and quality. In Ontario, the Agriculture and Food Laboratory (AFL) at the University of Guelph tests representative samples from virtually every Ontario farm’s bulk milk tanks for both composition and quality. Laboratory technicians use infrared technology to perform the compositional analysis of the milk for fat and protein. The information is then used to determine how much money is owed to the farmer since their pay is based on the product’s components as well the quality of milk. “They measure fat and protein percentages in milk, which are important to milk payment, but also for genetic improvement,” says Miglior.

The infrared technology that is used to determine fat and protein percentages can also be used to measure other components such as fatty acids, minerals and lactoferrin, a nutriceutical property in milk that can aid the immune system.

Miglior and Corredig are using the AFL’s milk sample data to predict these alternative properties. The results could have huge impacts on the dairy products and milk payments, but the research process is strenuous and time-consuming. “For fatty acids, we would use gas chromatography. It would take about one hour per vial (of milk) while [AFL technicians] do maybe 1,000 vials in an hour for fat and protein.”

Miglior and Corredig will use this small sample of data to create a prediction equation that can be used on all milk-recorded animals. This means if the researchers genotype between 5,000 and 10,000 animals for this project, the information they retrieve can be applied to the other 200,000 genotyped cows even if they weren’t specifically measured for a trait like fatty acids. Then, once the animals are evaluated, genomic selection can begin. Cows could potential be bred to offer specialty milk that features fatty acids, minerals and lactoferrin. If this process occurs, Miglior says Canadian milk could become more appealing in the North American market because it will be richer and healthier than milk from our southern neighbours.

“The science gives us the ability to identify those animals so the industry can adapt. This is an opportunity for Canada to be at the forefront of the milk industry with naturally selected animals and no genetic modification (GM),” says Miglior. “This is a natural way that allows us to make progress.”

Dairy milk imports currently account for 15 per cent or $440 million of the Canadian milk market. Innovative improvements to the components of milk could be exactly what the industry needs to capture back that share of the market.

From Lab to Farm
Farmers are continuously adapting to the changing landscape of the industry and research is understood to be a cornerstone for success. The Dairy Research Cluster II provides farmers with quarterly updates about research online through the Canadian Dairy Research Portal and every year representatives from each of the provinces attends a research symposium where study results are shared with the industry.

“This is where we see innovation and advancement,” says Taylor, who attended last year’s conference in Toronto as a representative for BCDA. “These are things our industry can look at and potentially use down the road.”

Dairy Research Cluster II isn’t the only program offering assistance to the dairy sector. Canadian Dairy Commission has a $6 million Matching Investment Fund (MIF) which is designed to encourage innovation in the manufacture and use of dairy products and ingredients while the Canadian Dairy Network’s DairyGen provides financial support to genetic researchers.

“The research that they’re funding is not for the researchers, it’s for improving and innovating the dairy sector. In the end, the farmers know the outcomes will benefit them on the farms,” says Crabtree.
Innovation will be a necessity to combat the increasingly difficult industry terrain. Roughly 35 years ago, Canada’s dairy industry produced 14 per cent more milk per capita than the U.S., but as of 2011, it produced 21 per cent less. But Canada’s focus on quality over quantity and innovation over short-term solutions places the country in a good position for global recognition.