Guaranteeing the safety of the food supply in Canada continues to prove challenging to industry and government. Food safety cannot be “regulated” into food and new approaches are required to support the production of safe meat products. Recognition by processors that “a culture” of food safety is the best strategy to drive enduring improvement has not achieved the level of ownership necessary. With the introduction of the Safe Foods for Canadians Act, the CFIA will attempt to re-think its options to more effectively protect the public. While it is unlikely that absolute safety of food is attainable, it is possible that with enlightened understanding and insightful approaches risks can be contained within acceptable limits. The meat industry will be used to illustrate common problems.

The Safe Foods for Canadians Act
With passage of the Safe Foods for Canadians Act (SFCA) in November 2012, the CFIA has embarked on an ambitious plan to modernize the federal food inspection system. The primary goal of the new Act is to consolidate the federal meat, fish, and agricultural products inspection legislation in one place and broaden oversight of imported foods by capturing those not covered by the Acts. However, it will not affect the 30% or so of foods we buy, including those that are sold locally within the province or territory of their origin. Basic legislation underpinning the safety of all food in Canada (The Food and Drugs Act and regulations) has remained unchanged, and although its revision has been high on the priority list of Health Canada for the last decade, parliamentary support has been lacking.

The focus of the SFCA will be on prevention and require all processors trading food inter-provincially and internationally to be licensed and have preventive food safety control plans (PCPs) such as Hazard Analysis Critical Control Points (HACCP) or an equivalent program in place. As an overarching principle, HACCP programs can only be successful in a company with a strong business food safety culture4. It may be possible that within the new proposed risk management framework, industry will have the flexibility to set food safety objectives and determine how these will be met. However, industry does not always have the proper tools and guidance needed to carry out a proper hazard analysis and initiate a comprehensive PCP. A European study of HACCP plans by multinational food companies identified errors in identification of hazards as well as underestimation of hazard severity and improper identification of critical control points (CCPs) which were related to inexperience of the HACCP teams4. This problem is unresolved and must be addressed even though the regulators (CFIA, USDA) are moving away from formally accepted food safety programs in favour of less prescriptive, but more outcome-based programs.

The SFCA will require those regulated to have a PCP in place, not just establishments processing meat, poultry and fish. Since the new inspection models will be outcome-based rather than prescriptive, evidence supporting PCP effectiveness must be provided by industry. This represents a significant departure from the unequally applied CFIA policy requiring HACCP recognition. For commodities where HACCP is not mandated (dairy, eggs, maple and honey products), its adoption has been less than satisfactory, in part, because of the broken promise that use of such a system would reduce the frequency of industry end-product testing required by regulatory agencies. Since sampling costs have not been reduced as anticipated by HACCP adoption, industry has not embraced, and infrequently takes ownership of these programs. Zero tolerance for pathogens in raw foods is an extension of this philosophy and represents an attempt by the USDA and the CFIA to be seen as taking steps to protect public health. Six more serotypes of E. coli were recently added to the adulterant list for fresh ground beef in the US and Salmonella and Listeria monocytogenes are probably not far behind. Such action will engender endless additional end product testing which is without scientific value in predicting the safety of food. 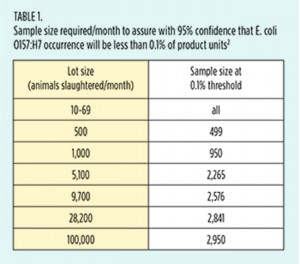 Microbiological Testing and Safety
Microbiological testing is one way to verify whether a food safety risk management system is performing as expected3. As the tolerated frequency or concentration of pathogens such as Listeria monocytogenes in ready to eat (RTE) meat and E. coli O157:H7 in raw meat is far less than 1%, it is not practical to determine compliance by microbiological testing alone. Microbiological criteria should be established in concert with good hygienic practices and operation of critical control points (HACCP) to yield compliance with a food safety objective3. The microbiological criteria for beef carcasses and raw beef intended for producing finished raw ground beef product, called precursor material (PM), requires that E. coli O157:H7 be below the limit of detection when tested by approved methods. Federally regulated slaughter establishments must use at least one pathogen reduction strategy to reduce E. coli O157 below the limit of detection and the intervention step, or the final step if multiple interventions are used, must be managed by a CCP2. The CCP must be validated by microbiological testing of carcasses over a 4 month period during the season with highest expected prevalence. Sampling plans are based on an expected prevalence of E. coli O157 of 0.1% in raw beef products2, which means that the sample size required to provide 95% confidence that product will be below 0.1% positive for E. coli O157 is quite large (Table 1).

Furthermore, for verification of the CCP, one carcass must be sampled every 1 to 3 months, depending on the volume of the slaughter facility. With an expected prevalence of 0.1%, the probability of recovering E. coli O157 is impossibly low. Therefore, a negative result for E. coli O157, especially from a single sample, doesn’t guarantee that E. coli O157 is absent from the lot. If sampling of PM yields > 5% positive E. coli O157 samples at the 95% confidence level, the CFIA requires that processors investigate the high event period and take corrective action. Processors may choose to set their targets at a more stringent level to increase the confidence that a non-conforming lot is detected and rejected. As the concentration of the pathogen declines, the confidence in results obtained from microbiological testing also declines. If E. coli O157 is present at a level of 1 cell per kg of ground beef and 5 subsamples of 200 g are collected, then theoretically one cell will be present in every 5th sample. If the presence of E. coli O157 is reduced to 1 cell per 10, 100 or 1000 kg, one cell will present in one in 50, 500 or 5000 samples, respectively. If pathogens are clustered together, rather than evenly dispersed, detection is further obscured.

Pathogen testing to validate HACCP systems is not informative as the data are based on their presence rather than their number. Microbiological testing for HACCP purposes is much more valuable when indicator organisms such as total aerobic bacteria, coliforms, Enterobacteriaceae, generic E. coli, fecal streptococci, aeromonads or generic Listeria are quantified, so changes in numbers can be tracked and trends established1. An effective HACCP program will progressively reduce indicator organisms to the lowest possible level. Methods are capable of enumerating indicator organisms at one viable cell per sample, when large surface areas (1000 cm2 or larger) are sampled by swabbing1. The latter authors suggested that use of performance objectives (POs) for indicator organism was superior to POs for pathogens as numbers can be measured and targets set with confidence to achieve desired levels. The numbers of generic E. coli that can be recovered from carcasses has dropped to <1/10,000 cm2 and from beef cuts to <1/100 cm25. With such low numbers of generic E. coli on meat, end product testing for pathogens becomes even less useful in predicting the safety of meat.

A New Cross-Commodity Inspection System
The SFCA plan for uniform assessment of commodities provides a unique opportunity to assign the inspection resource to where it is most needed. However, the requirement for a single inspector to have sufficient multi-commodity experience to insightfully assess performance of meat, fish, dairy and vegetable plants is an expectation fraught with new difficulty. Currently, inspector knowledge and training is a contentious issue from the perspective of industry. While requirements for uniform inspection and consistency in oversight response have been catalysts driving the proposed inspection models, overestimate of expectations will further undermine inspector credibility and that of the Agency very quickly. The recent CFIA announcement that roving Inspection Verification Teams (IVTs) would confirm PCP operation by unannounced audits, do trend analysis and ensure consistent inspector performance across the country, acknowledges that today’s inspection system, where inspectors have single commodity specific responsibility, has shortcomings. How will this improve when inspectors have responsibility for more than one commodity? Since the client will be responsible for decisions by the resident inspector not upheld by the IVT, plant closures can occur without warning. It should be recognized by the CFIA that by proactively ensuring adequate inspector training there is no need for IVTs. Indeed, it is the CFIA that has responsibility to employ adequately trained employees; regulated parties have primary responsibility for food safety.

Conclusion
The impact of the SFCA on meat safety in Canada will not be evident until the regulatory changes are implemented (early 2015). Although there is some promise from a more science-based approach to inspection, the current move towards more microbiological testing of finished products is unjustified and not supported by the science of sampling. While the CFIA has a lot on its plate developing the regulations for the SFCA, so do Canadians. We put 36 billion meals a year on the table only to find that 3-6 million of them cause illness. The SFCA provides an opportunity to change these statistics, but this is only likely to happen if risk-based inspection models are soundly based on science and experience.