RECENT TRENDS HAVE LED TO LOWER CEREAL CONSUMPTION, BUT FOR COMPANIES THAT CAN FIND A NICHE, CEREAL CAN STILL BE LUCRATIVE 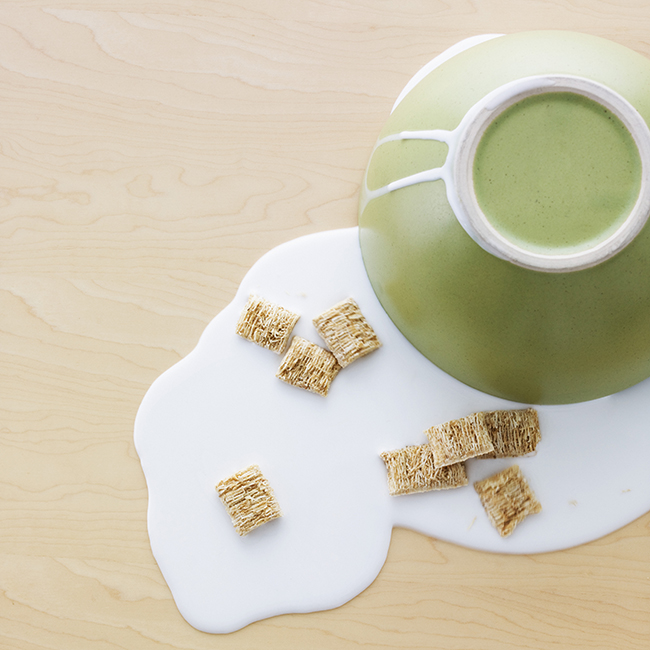 There’s a killer on the loose. Cereal has been a staple of breakfasts for more than 100 years but changing consumer demands have become cereal killers for world famous brands like Kellogg and General Mills.

Stagnating cereal growth over the last decade has forced General Mills to shift its focus away from marketing cereal to pushing its yogurt brands. Kellogg recently announced it would be cutting thousands of jobs in an effort to boost profits as cereal sales fell four per cent in the latest quarter and two per cent for all of 2013, as consumers increasingly switch to other breakfast foods, like breakfast bars, bagels and increasingly fast food options.

North American cereal sales have been steadily declining for years as busy consumers are faced with less time for breakfast and an array of healthier choices they can dash out the door with. Cereal consumption has been decreasing one per cent per year for the last decade. On average, U.S. cereal sales grew less than one per cent per annum since the start of the century, compared to three per cent for the wider packaged food market, which is just slightly above the inflation rate. A recent Rabobank Group report said, “Flat sales and declining volumes over the past decade indicate consumers are tiring of boxed cereals. They are being lured away by more contemporary, aspirational, and convenient morning eating options.”

But the same Rabobank report wasn’t dismissive of cereals’ outlook altogether. After all, this is still a $10-billion market and the top breakfast option for the vast majority of consumers. It’s twice as popular as the second-place choice for breakfast – fresh fruit – and is a key driver of supermarket traffic, trailing only fresh bread and snacks in dry grocery purchasing frequency.

But other breakfast options are catching up as consumer eating habits are changing. Fewer and fewer people are sitting around the kitchen table with a bowl full of cereal. That’s the result of both a culture change to extremely busy lifestyles but also because of increasing consumer desire for nutrition and health. In order for cereal manufacturers to be competitive, they need to find a niche and innovate, say experts. “We believe that breakfast cereals can aspire to more than single-digit growth and erosion of market share,” says Nicholas Fereday, author of the Rabobank report. “To turn the tide, we suggest a renewed focus on innovation.”

Amidst the stagnating sales, an innovative company from B.C. has been able to make astounding progress by exploiting a niche in the cereal market. With health becoming such an important driver for consumers, HapiFoods Group Inc. was able to fill a gap that nobody else was. “No one wants frosted sugar bombs anymore for breakfast,” says Rob MacNeil, Director of Canadian Sales for HapiFoods Group. “When CBC does a big expose on sugar and the white death that it is, that’s how mainstream this idea is getting. That consciousness has already hit the consumer and people are turning away from these cereals just because they’re looking for something a little healthier in the morning that actually gives them real nutrition.”

Corin and Brian Mullins launched HapiFoods, a gluten-free, vegan, certified organic breakfast cereal at Sechelt Farmer’s Market in B.C. in 2009. But the surprising popularity of the cereal prompted a name change. “Customers started coming back week after week,” says MacNeil. “A lot of people would go, ‘Holy crap… This stuff is amazing.’ So Brian thought about this for a while and they switched the name to Holy Crap as a little bit of a tongue-in-cheek thing to see what would happen.” Sales increased 1,000 per cent – from 10 bags a day to more than 100.

The cereal started to go mainstream when Overwaitea Foods and then IGA in B.C. picked up the cereal. “What happens when you have a local store carrying you’re product is all of a sudden accounting will say, ‘Look at the till, look at the frequency, we need them in the warehouse,’” says MacNeil. “Sales speak volumes.”

The company is also starting to expand the company’s product line, with some inspiration from an unlikely source: space travel. After winning a Canadian Space Agency contest, Commander Chris Hadfield was eating Holy Crap for breakfast for five months between December 2012 and May 2013. “I think the winning suggestion came from an 11-year-old out in Abbotsford, B.C.,” says MacNeil. “We didn’t even know there was a contest until we were told we were in it and had a winning submission and it was like, ‘Oh, wow. Great, NASA wants our cereal. Well, sure, here you go.’”

Holy Crap’s space odyssey not only garnered the company excellent publicity, but also gave them the idea for a single serve cup. Part of the rationale for developing the packaging was to address misconceptions about the price of the cereal. Holy Crap retails for around $11.95. At face value that can sound expensive compared with competitors but the portion size for Holy Crap is two tablespoons of the cereal soaked in milk or water. “People look at our cereal and say, ‘Oh, that costs a lot,’ but it works out to be about $1.50 a serving which is cheaper than a doughnut in most cases, and infinitely better for you,” he says. The single serve cup allowed the company to fill different mandates from allowing new consumers to try the cereal, offering an easy delivery system and convenient packaging for traveling. “The value proposition of the cup is huge,” says MacNeil.

Holy Crap cereal comes in a convient single cup serving following its successful space travel.[/caption]After starting five years ago at the farmer’s market with that $129, Holy Crap brought in revenue of $5 million last year and is now carried in 2,200 health food stores and grocery stores across Canada with expansion into the United States underway. “We’ve created a category now in the cereal aisle,” says MacNeil. “The whole idea of a gluten-free, salt-free, sugar-free product was basically unheard of in cereal. The segment is filling in quite rapidly behind us but when we started the whole idea, it was out there, but not like it is now. Gluten-free three years ago in most mainstream grocery stores just didn’t exist and now gluten-free is pretty much all you see.”

Retail Breakfast Battles
Despite Holy Crap’s success, it is the exception rather than the norm. With cereal consumption on a steady decline, retailers are scrambling to find the product that consumers will buy. 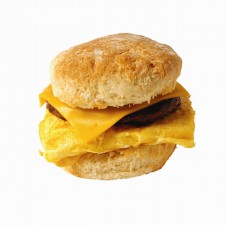 While Holy Crap is leading the nutritional charge, grocery aisles are still chalk full of sugary, unhealthy products. Slowly, some multinationals are jumping on the health trend by introducing high-protein products. A Technomic report found that 77 per cent of consumers consider food that is high in protein to be relatively healthy. The health halo that protein carries has led to companies introducing products like Kellogg’s Special K with Protein and General Mills’ Nature Valley Protein Crunchy Granola to attract health-conscious consumers.

The desire for protein has also led to an increase in Greek yogurt products as well as protein bars and drinks being sold for breakfast. Upscale preparations and ingredients are leading the expansion of products at retail stores. As consumers’ busy mornings show no sign of slowing down, manufacturers and retailers are devising portable options such as single serving foods and handheld beverages.

Manufacturers are also missing an opportunity to capture a large portion of the market that isn’t eating the most important meal of the day regularly. According to a Technomic report, just 40 per cent of people who eat breakfast say they always eat the meal and 43 per cent skip it at least weekly. “We find the biggest reason consumers are skipping is because of the convenience factor,” says Kelly Weikel, Senior Consumer Research Manager at Technomic. “A lot of opportunity comes in those skipped meals.”

Fast Food Competition
While cereal is fighting to keep its share of the retail breakfast market, that’s just one battle in the war for breakfast. Grocery stores are facing increasingly fierce competition from the food service industry to capture breakfast consumers. Since 2007, annual breakfast/brunch occasions at restaurants and fast food locations have grown by 159.7 million visits. Weikel says breakfast has surpassed lunch and dinner as the biggest battleground.

“It’s highly competitive between in home and fast food or food service,” she says. “The biggest obstacle to consumers purchasing food away from home is price.” Technomic found that 52 per cent of consumers who eat breakfast at home do so to save money. “Basically, they know they can make food at home much more economically, but at the same time, because convenience is such a strong factor it really plays into that value equation.”

“While price will always be a large tipping point for consumers, going to the drive through and picking up a hot breakfast is becoming an increasing viable alternative for consumers.”

While price will always be a large tipping point for consumers, going to the drive through and picking up a hot breakfast is becoming an increasing viable alternative for consumers. “I think the biggest thing is convenience,” says Weikel. “Retailers really need to find some options that make it easy for the consumer.” To that end, breakfast sandwiches are becoming more and more popular as they’re affordable, easy to prepare and portable.

Retail Advantage
With the importance of health apparent in the cereal segment, nutrition is a good differentiator for retailers compared to the food service industry. “The perception around how unhealthy fast food is, is definitely a strength of the retail industry,” says Weikel. “And that’s why you see so many operators trying to improve its positioning.”

The retail sector can entice new consumers and retain old ones by taking a page from the enemy. “I see the retailers taking a page from the food service industry,” says Weikel. “Because our culture is becoming more pressed for time and faster paced, I think it’s going to start trending to more premade breakfast sandwiches, premade products that aren’t going to take consumers long to make themselves and that are going to be easier.”

The other thing both retailers and food service companies are looking at is fresh prepared food. There isn’t much interest yet for breakfast but given its popularity for lunch and dinner, Weikel thinks it’s only a matter of time. “That could be opportunity as well for retailers, to take that healthy, home-style positioning and provide consumers with a middle ground between retail and food service.”