The Father of Fusion

Sitting down in Luckee restaurant, it’s hard not to notice Susur Lee. 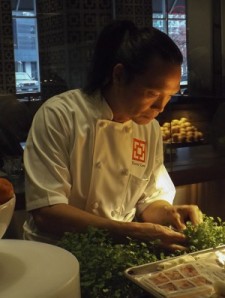 After being on TV for years, the face is recognizable yet he’s bouncing from table to table, greeting guests, before he jumps into the kitchen – all seemingly endless energy.

Lee opened Luckee, serving Chinese cuisine with around-the-clock dim sum service, at the SoHo Metropolitan Hotel in downtown Toronto in March. Luckee joins Bent and Lee as the chef’s other restaurants in Toronto. He’s also consulted for and owned restaurants around the world. “I just love to continue cooking and to invent things and I found that it is my passion,” says Lee. “It came naturally and also I love the excitement of doing something new. It makes you want to follow through.”

You’ve been involved in restaurants for more than 30 years. How has your cooking style changed over time?
Sometimes many great chefs are great in a certain style of cooking, French or Italian, and it comes from culture. I always say I don’t really have one culture. I love culture and that’s why I like to share and borrow and learn. Since I was young I always wanted to leave Hong Kong. I wanted to see the rest of the world.

People refer to you as the father of fusion. What does that mean to you?
I’m a very old school chef and I believe the way I train is about mastering. Being a master you have to know everything but you have to share the things you know. When people call me the Father of Fusion it is such an honour because people respect what I do, and people understand my skill and what I’m going to teach the next generation.

Has there been any person or thing that has influenced you a lot in your cooking?
Oh, my mother is a terrible cook; I think that was very important. It might sound funny but it’s very true. Because I was picky when she was making food I always criticized. I didn’t want to eat her food and it would become a habit, everything she would make, I’d use my chopstick moving it around trying to see what it was. I think that’s something to do with it but I think I just bonded with [food].

Out of all your accomplishments in your life so far, what are you most proud of?
I don’t look back. I’m just looking forward to what I’m going to do. As Buddha says, you just look forward to what’s in front of you, don’t look at the past and that makes life exciting.

What are you looking forward to then?
To continue to see food as another level of things I’ve never done or seen before.

You’ve been on TV and done a lot of shows. Did you always want to get into that?
I pick and choose about that. I’m not so interested in cooking shows. I like competition shows. I like shows that have to have some meaning to me. Judging is good, sort of like the language of testing your skills. Also I don’t like to show up at the studio, over and over again. It would be very boring for me.