Honeybees and Humans, a Critical and Threatened Relationship

In the relatively short history of humans, our relationship with bees and the honey that they produce has been a mutually beneficial enterprise. It has been postulated that this relationship may have played an important role in our evolution, due to the fact that honey was a readily available energy dense food that is rich in the carbohydrate glucose, which plays an important role in human brain development1. Although the role of honey and human evolution can only be inferred, there can be no argument that honeybees and honey have, and continue to play, an important role in the lives of humans.

Egyptians were believed to be the first domesticators of bees, which is supported by wall illustrations dating back to 2422 B.C. showing beekeepers blowing smoke into hives in order to remove the honeycomb. Bees also played an integral role in Egyptian mythology as they were created when the golden tears of Ra, the sun god, fell to earth.

In this short paper, a number of topics dealing with honeybees and honey will be discussed. Included are, the role of honeybees in honey production, the chemical composition and uses (food, cosmetics and pharmaceutical) of honey, Canadian honey production figures, and a brief synopsis on the critical and currently threatened relationship between humans and honeybees. 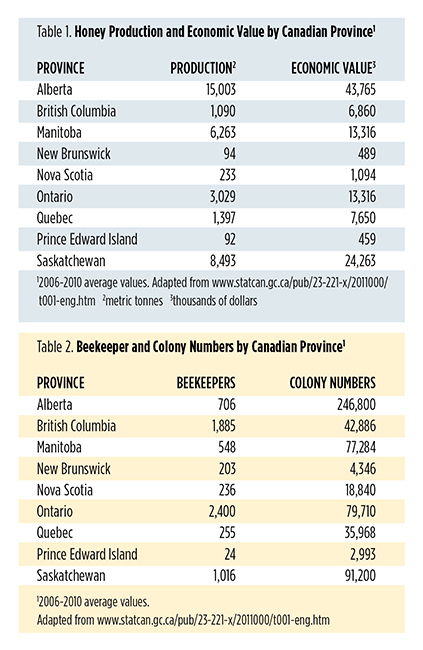 Honey is made by bees, and the raw material for practically all of the world’s honey supply is the nectar produced in the nectaries of flowers. Generally, only the social bees that establish permanent colonies store honey in sufficient quantities to be of economic importance. These social bees are termed honeybees (Apis), and the tropical stingless bees, Meliponins. There are four “widely recognized” species of Apis (A. cerana, A. dorsata, A. florea and A. mellifera), of which A. mellifera and A. cerana are responsible for the production of the bulk of the world’s honey. The production of honey from nectar by the honeybee is an interesting and complex process. Foraging bees carry the nectar in their honey sac, mix it with enzyme-rich secretions from their hypopharyngeal glands, carry it to the hive, and transfer it to the house bees orally. The house bees, in turn, transmit the sweet liquid among themselves, carrying out the process of ripening by mixing glandular secretions and by removing water. The process of ripening is continued, which results in approximately 50% water loss to the sweet liquid. This material is then transferred to the cells of the comb where additional water removal occurs due to the ventilation system of the hive. When a moisture content of the produced honey is approximately 20%, the comb cells are capped with wax by the bees. It is important to note that all of the work in transforming nectar to honey is carried out by the female population of the hive2.

Although honey is comprised of a large number of chemical compounds, carbohydrates (~80%) and water (~18%) account for approximately 98% of honey constituents. The two major carbohydrates present in honey are the monosaccharides D-fructose and D-glucose, and these two compounds are responsible for about 92% of honey carbohydrates with the remainder being oligosaccharides such as sucrose7. Generally, the fructose (F) to glucose (G) ratio (F/G) in honey is about 1.2.  In addition to carbohydrate, other important (i.e. for the health of the honeybee) honey constituents include minerals, organic acids and proteins, however these compounds are present at levels <0.3%8.

Food and Non-food Uses of Honey

The chemical and physical properties of honey have made it an ideal ingredient in many food formulations and also as a stand-alone product. As honey is comprised mainly of carbohydrate, its major use is as a sweetener for foods and drinks. The relative sweetness values for the major carbohydrates in honey are, glucose (sweetness value of 0.7), fructose (1.5) and sucrose (1.0). As honey is fructose rich, it is approximately 20% sweeter than table sugar (i.e. sucrose) on a moisture equivalent weight-to-weight basis therefore, one can use less honey to bring about the same sweet taste response in a food or beverage. Honey is an important ingredient in baked goods as it has the ability to hold moisture (humectant) in these products during heating thus eliminating textural problems in the finished product such as dryness and crumbliness. Honey has also been shown to act as a natural preservative for foods. This property is based on its high carbohydrate content, which affords water binding with a concomitant lowering of water activity, its low pH (~3.9), and the presence of antimicrobial agents including but not limited to bacteriocins and hydrogen peroxide (produced by glucose oxidase). Other uses of honey as an ingredient in food formulations include but are not limited to: pH balance in dairy products and beverages; flavouring agent in dressings and sauces; colouring agent in yogurts, puddings and bakery products; a carbohydrate source for the alcoholic beverage mead; and as a viscosity modifying agent in salad dressings.

Honey is also commonly used in non-food products such as pharmaceuticals and cosmetics. In cosmetics, honey is particularly desired for its emollient effect on the skin. As such, honey is present in a number of commercial products including, facial masks, handcreams, lotions and soaps9. It is also used in hair conditioners and shampoos. In pharmaceuticals, honey is used as a sweetening or palatability agent for general pharmaceuticals (e.g. cough syrups) and as a base agent for ointments. Honey has also been employed for: wound dressing, based on its antimicrobial and oxygen barrier properties; for sobering inebriated patients via its ability to increase alcohol metabolism based on fructose content and the presence of catalase; and for the treatment of respiratory infections, among many others10.

Symbiotic Relationship Between Humans and Honeybees

Our ancestors realized the important symbiotic relationship that we, as humans have with these animals and invested great time and energy into honeybee domestication and health. In Canada and other Northern climate regions, a common practice of beekeepers is to provide their colonies with a source of food, which is typically honey but may also include carbohydrate syrups such as high fructose corn syrup, when foraging is not possible; a practice known as overwintering. Beekeepers are also actively involved in maintaining the overall health of their colonies. This is an ongoing and sometimes very difficult practice due to the social nature of bees as once a disease or infection enters the hive it generally spreads rapidly. Examples of a honeybee disease and an infection and their treatments are: (a) American foulbrood, which is a highly contagious bacterial (Paenibacillus larvae ssp.) disease of honeybee larvae. The sources of this infection include: spore-contaminated nectar; and spore-contaminated honey that is robbed from afflicted colonies too weak to effectively defend their stores. In either case, spore contaminated nectar or honey is brought back to the hive by foraging bees.

Treatment usually involves feeding the colony with a carbohydrate source containing an antibiotic (e.g. Terramycin; Tylan). In severe cases, the entire hive population including all infected materials (boxes, frames, etc.) are burnt; and (b) Varroa mites (Varroa destructor), are parasites that feed on the body fluids of adult and developing honeybees. The presence of these mites in the hive results in a severe weakening of the colony directly, and they also serve as transmitters of several viruses that can result in bee death. If not promptly and effectively treated, complete destruction of the colony occurs. A number of treatment methods have been introduced, which include but are not limited to, the use of ‘sticky boards’ in the colony to physically trap the mites; and chemical (pesticide) treatment with amitraz, coumaphos or fluvalinate. A more recent advancement in the control of Varroa mites is the “bee gate”/“varroa gate” developed by research scientists at Bayer CropScience through their Bee Care Program11. In this method, when the foraging bee returns to the hive she passes through holes (i.e. gate) lined with a plastic strip containing an anti-mite chemical (acaricide), this brushing action transfers a mite poison to the bee and kills the mite. Beekeepers are keenly aware of the relationship between the timing of any disease/parasite treatment and the presence of chemical residues in honey. Because of this delicate relationship, alternate treatments for the control of bacterial diseases and parasitic infections are under investigation, which include: biological control employing fungal pathogens (e.g. Beauveria bassiana); and breeding bees that will be more resistant to the mite12,13.

Honeybees are critical in the pollination of many world fruit and vegetable crops with an estimated commercial value ranging from $200-$300 billion (US)/annually. It has been reported that fruit, vegetable or seed production from 87 of the leading global food crops are dependent upon animal pollination14. In Canada, examples of the importance of pollination by honeybees include but are not limited to the horticulture (e.g. apples and blueberries) and hybrid canola (seed production) industries, with an estimated pollination value >$2 billion annually6. Currently, the symbiotic relationship between humans and honeybees is being stretched to its breaking point. This issue is clearly illustrated by the recent massive decline in honeybee colonies labeled ‘Colony Collapse Disorder” (CCD). This massive loss (30-90%) of bee colonies was first observed in the United States in 200615. It should be pointed out that CCD is not believed to be an issue in Canada today16,17. Although these significant losses have decreased over the past few years, CCD continues to be a significant problem in many parts of the world. A number of possible causes for CCD have been postulated, which include: cell phones/cell phone towers, hive transportation stresses (pollination-service bees), genetically modified crops, global climate change, high fructose corn syrup, nutritional deficiencies (due to monoculture pollination), parasites, pathogens, pesticides, and ozone. However, each of these issues has been investigated scientifically with no clear correlation of cause-and-effect being conclusively proven18. The most widely accepted hypothesis for CCD is the combined effect of a selection of the aforementioned factors, referred to as primary causal agents, which negatively impact the immune system of the honeybee making them less resistant to infections. This hypothesis is supported by the increased winter colony mortality rate, from the normal 5-15% (2002-03) to ~36% (2007-09) observed in Canada. The main cause for this dramatic increase in colony mortality was related to the observed high levels of Varroa destructor, inadequate treatment regimes and acaricide resistance16.

How our relationship with honeybees can be improved is, I believe, an issue that we can both control and implement. Reducing the negative impact that we have on the environment, taking more care in the use and timing of, and being more aware of (i.e. types, concentrations and treatment regimes) our agricultural chemical use on crops visited by animal pollinators, our beekeeping practices, and our development and implementation of disease/infection treatments will go a long way in restoring this symbiotic relationship.