AND ITS IMPLICATIONS FOR THE CANADIAN SWINE INDUSTRY

BACKGROUND
The rapid emergence of the porcine epidemic diarrhea virus (PEDv) in North America has significantly impacted hog industry operations as well as the supply of market hogs. While known to have caused outbreaks for several decades in Europe and Asia, PEDv was reported in USA hog herds in early 2013, and thereafter in several Canadian provinces in early 2014. The advancing PEDv crisis highlights the potential for highly-infective agents for which there are no pre-existing vaccines to rapidly impact the large scale production of swine, and also emphasizes the potential for emerging pathogens to similarly affect large-scale, food animal industries. 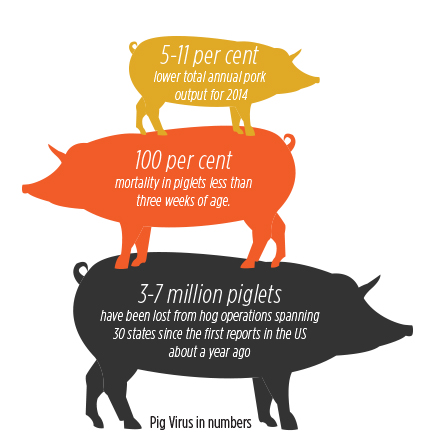 PEDv is an extremely contagious agent spread by the fecal-oral route, causing severe diarrhea in swine and 100 per cent mortality in piglets less than 3 weeks of age. While numbers vary between different reports and because the situation is so dynamic, it has been estimated that between 3-7 million piglets have been lost from hog operations spanning 30 states since the first reports in the US about a year ago1 resulting in 5-11 per cent lower total annual pork output for 20142,3. This damage to the industry is now being felt by consumers in the form of increased pork prices in grocery stores.

In the absence of a widely-available and effective vaccine, enhanced biosecurity measures constitute the main strategy available to producers to prevent the unmitigated spread of this virus. However, these measures haven’t been 100 per cent effective and thus industry experts are still struggling to control PEDv spread. Intensive industry-funded research initiatives are underway globally in an effort to meet this challenge through technological advancement. The PEDv crisis is widely believed to be the most serious challenge facing the hog industry in recent memory. Canadian herds, while somewhat insulated geographically from American herds, are clearly also under threat.

HOG PRODUCTION IN CANADA
Seen as the “second white meat”, pork is widely-consumed in many countries around the world as a flavorful meat product with excellent protein and nutrient content. Hog production is a major component of the commercial agricultural animal sector in Canada, with Statistics Canada4 estimating total numbers of hogs produced for 2013 at 25,000,000 animals. Furthermore, there has been a growing trend in the industry over the past several decades towards a reduction in the number of small hog operations, resulting in fewer but larger remaining operations. This trend has been driven by the economies of scale and improved technologies that enable more hogs to be produced by fewer people while requiring less inputs and resources. In other words, the larger the operation, the more profitable the operation is on a per-hog basis. The potential impacts of PEDv on these large animal operations are similarly large, and in the USA, approximately 5 per cent of the national herd is estimated to have been lost due to PEDv3.

To date, Canada has remained relatively PEDv-free compared to US hog operations. However, the CFIA (March 3, 2014) reported on their website that PEDv has been confirmed in swine herds in several provinces (i.e., Ontario, Manitoba, PEI and Quebec), and given the extremely hardy and virulent nature of the virus, the agency expects that more cases will be reported from across the country. It is notable that PED does not pose a risk to human health nor to food safety, and is currently not a reportable disease in Canada according to CFIA (note that it is reportable in some jurisdictions, i.e., Alberta); however, the USDA issued a Federal Order on June 5, 2014 requiring the mandatory reporting of swine enteric coronavirus diseases, including PEDv3. It is therefore likely that in addition to enhanced surveillance of PEDv and biosecurity measures (see below), national mandatory reporting of the disease may yet occur across all of Canada.

CHARACTERISTICS OF THE VIRUS AND ITS EFFECTS
PEDv is a member of the Coronaviridae family of enveloped virus (genus Alphacoronavirus), approximately 90-190 nm in diameter, with malabsorptive diarrhea (affecting the ability of the small intestine to absorb water and nutrients) as the main presenting symptom within 1-3 days of infection. Damage and destruction of the microvilli of the small intestine is typically observed upon histological analysis. Suckling pigs present symptoms that include watery diarrhea, vomiting and wasting; almost 100 per cent of infected suckling piglets ultimately die of dehydration. Upon necropsy, the small intestine of infected piglets undergoes extreme thinning, and becomes gas-filled and translucent. Clinically, PEDv is indistinguishable from the symptoms of transmissible gastrointestinal epidemic virus (TGEV), another Alphacoronavirus.

PEDv is a single-stranded, positive-sense RNA virus, with a genome approximately 28 kb in size that contains 7 open reading frames, also known as ORFs, that encode for two replicase polyproteins, four major structural proteins (S (spike), E (envelope), N (nucleocapsid) and M (membrane)), as well as a hypothetical accessory protein. These markers are of critical importance to the PED virus with respect to virus-host interactions, growth adaptation and actual epidemiological status. Detection of PEDv from clinical samples is most rapidly performed using reverse transcriptase real-time polymerase chain reaction (RT-PCR), based on unique genetic sequences within the key structural proteins (i.e., based on the amplification and detection of the nucleocapsid (N) protein gene)5. However, improved molecular-based detection methodologies which are sensitive to different PEDv lineages are anticipated to become available.

Work on viral phylogenetics, which focuses on genetic evolutionary relatedness of the PED virus, has indicated that several lineages of PEDv have emerged in North America that appear to be closely related to a strain of Chinese origin deposited to GenBank in 20126. Three US viral lineages, or populations, have thus far emerged. The lineage or lineages that are currently affecting Canadian hog operations are not entirely clear at this time. Knowledge of lineages and their spread will provide greater insights into mechanisms of transmission and progression of this national/international pandemic.

STRATEGIES FOR COMBATING PEDV SPREAD.
PEDv is spread primarily through fecal-oral transmission, although there are concerns that it may also be spread via aerosols7. It has also been suggested that a thimble full of fecal material from a PEDv-infected animal contains sufficient virus to infect the entire US herd of suckling piglets8.

At present, biosecurity strategies are the main barrier against the spread of PEDv since the majority of animals in North America have not been vaccinated (on June 16, 2014, Harrisvaccine, of Ames Iowa, received a conditional license from the United States Department of Agriculture for the company’s Porcine Epidemic Diarrhea Virus (PEDv) Vaccine). Given that Canadian pig herds are all immunologically-naïve (e.g., the animals have never been exposed to the virus and hence adult animals have no acquired or innate immunity whatsoever), there exists no passive or active immunological protection. Outbreaks are thus the consequence of the inadvertent direct introduction of infected animals into disease-free herds, or though the indirect transfer of virus via the contact of persons or materials. The role of virus-containing particles, or fomites, in this indirect PEDv farm-to-farm spread scenario is widely-thought to be vehicle mediated however, truck wash stations haven’t necessarily been adequate to disinfect truck/trailers exposed to PEDv. Stringent cleaning of hog transport trailers and equipment is clearly necessary to prevent cross-contamination and transmission, and a key barrier to vehicular PEDv transmission includes washing, disinfecting and drying swine trailers. While efficacious disinfectants are available (i.e., a 2 per cent phenol-based disinfectant such as TekTrol, One Stroke Environ, or Pheno-Tek II), their effective application after spray washing is necessary. Generally, the vehicle/trailer should be dried at elevated temperature after washing to ensure control of the virus (i.e., 160 F for 10 minutes or RT for 1 week). Overall, these measures are impacting the economics of hog transport to various markets.

The search for antimicrobial agents with enhanced efficacy against PEDv has accelerated, and Stalosan® F, which have previously been assessed against the bacterial pathogen Lawsonia intracellularis (which causes proliferative enteropathy in swine9, was suggested as a possible agent effective at controlling PEDv in organically-contaminated material in trailers. However, later tests indicated that protection wasn’t complete10 and hence the search continues. Possible agents currently under investigation include use of nanomaterials as antimicrobial agents that can be incorporated into organic materials and used to treat other critical surfaces (e.g., parking lots, loading bays, etc.) where use of foam and chemical disinfectants and antivirals aren’t suitable.

Overarching biosecurity guidance has been provided from various interest groups and governing bodies. The Canadian Swine Health Board has published a National Swine Farm-Level Biosecurity Standard at http://biosecurity.swinehealth.ca/biosecurity-standard/. This is an excellent resource focusing on various direct and indirect routes by which PEDv, and other hog pathogens, may come in contact with swine herds, as well as measures for mitigating these risks. Given that there remains a substantive technology gap for control of this agent, integrated measures are clearly critical. Biological control of PEDv involves vigilance both on and off the farm, and multi-barrier biosecurity approaches that extend beyond the barn are accordingly warranted and necessary. Such biosecurity strategies include tight control over material, animals and animal products, and individuals that enter a hog facility, as well as those areas surrounding barns. This list of indirect contamination routes is in fact quite broad, and in part, includes: incoming and outgoing animal transportation, dead stock, people/workers, aerosols, feed/bedding, fomites, etc. In fact, there exist concerns over those areas frequented by people living and working in the vicinity of hog barns, as indirect contact leading to cross-contamination of individuals and their clothes could also play a role in PEDv transmission. Biological control measures are largely common-sense in nature, and have extensively been reported and reviewed in various trade, industry and scientific publications and venues.

It has also been assumed by various animal health professionals and agencies that acquired resistance by adult animals that were previously infected with PEDv would result in long-lived immunity of perhaps several years or more. However, this appears to not be the case, and while more data is needed, the reinfection of herds that were previously affected by the virus has already been reported in US herds1.

FUTURE OUTLOOK AND LESSONS TO BE LEARNED.
Clearly, the timely development of long-lived, efficacious vaccines is needed to combat rapidly emerging and highly infectious virus such as PEDv and TGEV. Transport vehicles have been identified as a key vector for viral transmission between geographically widely-separated hog barns therefore, improved sanitation and biosecurity practices, hygiene, and segregation practices during animal transport and delivery to slaughter facilities, are key first points of attention, as trailers/transporters typically service multiple producers. It remains to be seen how rapidly PEDv will spread across Canada, as provinces west of Manitoba are yet to report any cases; the current heightened biosecurity measures seem to be holding the spread of the disease but with potential loopholes already identified, more effort is needed shore up defenses to avoid experiencing a situation similar to that in the US.