In the wake of recent pet food recalls, consumers are willing to spend more on premium, quality ingredients for their animals 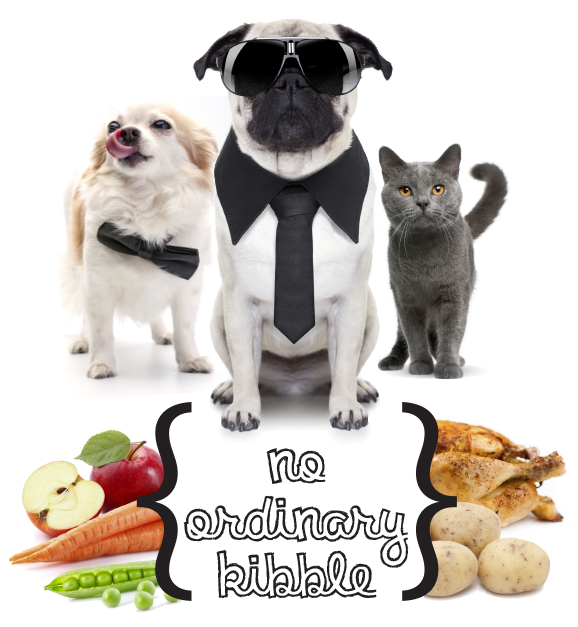 Your dog would gladly eat the food off your plate, but would you eat what’s in its bowl? Dorothy Hunter would.

Hunter, owner of Paws Natural Pet Emporium is an advocate for all-natural, premium pet food and is willing to put her money where her mouth is. In July, she embarked on a month-long dietary challenge to eat only pet food to promote ingredient awareness. “Consumers need to realize that not all pet foods are the same. They need to read labels,” she says. Hunter strictly sells pet foods that are free of corn, wheat, soy, by-products, fillers, preservatives and additives such BHA, BHT, Ethoxyquin and Propylene Glycol.

This is a relatively new phenomenon largely brought about by the widespread pet food recall of 2007.

The result is that for many consumers now, the generic kibble on pet store shelves no longer meets the standards for the modern day pooch. The pet food industry is changing as more companies are heeding consumer demands for healthy, gourmet pet food made with premium ingredients. Human-grade food, locally sourced ingredients, organic products, raw diets, vegan blends and sustainable packaging are just a handful of the consumer needs companies are addressing to stay competitive in the market.

Adrian Pettyan, owner of CARU pet food, a company which produces human-grade pet food, says the 2007 melamine scare from China was the impetus behind the movement toward cleaner pet food. “Although it was a tragedy for pet owners and the pets themselves, it was a turning point to help educate consumers to pay attention to pet food labels,” says Pettyan.

The episode served as a wakeup call for pet owners and the pet food industry has responded. Big box stores like Wal-Mart now carry numerous healthy pet food labels, and multinationals like Nestle are hopping on to the bandwagon with its Purina Beneful Pet Care line. Companies are expanding their product lines to accommodate market demands for higher quality, wholesome and eco-friendly products and reformulating and launching premium, all-natural pet food lines. Some of the ingredient features include a blend of omega-3 and -6 fatty acids that are free of soy, wheat, corn, artificial colours, preservatives and protein by-products.

Consumers are treating pets as members of their families. This is most pronounced among young, urban adults, childless individuals and aging baby boomers looking to fill empty nests; their pets are humanized and treated as surrogate children. Pet humanization views have evolved and consumers prefer to purchase pet products with recognizable ingredients that are similar, or even better, than what they are feeding themselves.

ACADEMIA INVOLVED
Due to the growing popularity of premium pet food, the University of Alberta received $1.6 million in federal funding to further pet food innovation. The university used the equipment grant to purchase a single-screw pilot extruder, the only one of its kind in Canada, to cost-effectively develop nutritious pet food. The single-screw extruder can process meats, grains and vegetables, and is able to shear cell walls, cook, blend, texturize and shape pet food.

“This extruder is unique because it is much smaller than the equipment found in commercial pet food plants, but is still scalable for commercial production,” says Ruurd Zijlstra, an animal science professor at the university who specializes in monogastric nutrition for pigs, dogs and cats.

The pet food industry will benefit from the university’s extruder with cost-effective and simple product development. It enables researchers to develop new functional ingredients and test the formulations immediately. The university is working on this project with Champion Petfoods, Alberta Livestock and Meat Agency and Elmira Pet Products.

PREMIUM INGREDIENTS = PREMIUM PRICES
Last year, 57 per cent or approximately eight million Canadian households owned pets. Despite economic struggles and the increasing costs of pet ownership, pet spending has not curtailed. Retail sales in the Canadian pet food market are projected to grow to $1.9 billion, or by 10.2 per cent by 2016. Dog food sales are projected to increase by 11.5 per cent, followed by cat food at 9.8 per cent, according to Agriculture and Agri-Food Canada’s Market Indicator Report.
This is good news for manufacturers and retailers because all the premium ingredients consumers are demanding leads to premium prices. High quality pet foods will continue to gain ground in the marketplace. The growing humanization trend means consumers are willing to spend more to improve the lifestyle of their pets.

“You will certainly see a cost increase when the ingredients used are premium and target health benefits. These ingredients cost more. Production costs increase and it is entirely fair to see a segmentation in the pet food market,” says Zijlstra.
Sixty-nine per cent of pet owners agreed that they were willing to spend extra to ensure the wellness of their pet. The Canadian Pet Market Outlook 2014, a report published by market researcher Packaged Facts, found that 41 per cent of consumers believe that natural and organic brand pet products are better than standard national brand products.

At the 2012 Global Pet Expo, the number of booths in the show’s Natural Pet section increased almost 70 per cent compared to 2011, making natural pet products one of the fastest growing segments in the pet industry.

With consumers placing so much importance on their pet’s health, nutrition has become paramount in the food they feed their animal. Pettyan says, “good nutrition for a pet is like buying insurance against sickness.”

It’s leading the pet food industry in the same direction as human food. “In human foods, we try to eliminate unhealthy fats, preservatives, additives and ingredients that people cannot pronounce let alone, understand. Humans are moving toward a cleaner, natural diet and this is paralleled in the pet industry,” says Pettyan.

THE VEGAN DOG
One human trend might be going too far, putting dogs at risk. The pet market is taking a page from human health trends and is latching on to the vegan market. Halo, a holistic, all natural brand of speciality pet food carries a vegan blend that uses plant based protein from green peas and chick peas; the antioxidant rich blend also includes oats, potatoes, carrots and cranberries.

Hunter says vegan diets are intended for pets who suffer from health issues, such as renal failure, that require a low-protein diet, but she has been approached by customers who choose to switch their dog’s diet to a vegan blend because of their own preferences. She strongly advises against a vegan diet for pets unless it is warranted by health problems. “Some pet owners disregard this. This is when the trend speaks to the preferences of the pet owner instead of the well-being of animals,” says Hunter.

Evidence suggests a dog’s body is optimized for eating meat. Pettyan, who vets each of CARU’s pet formulas with an animal nutritionist, says dogs are not intended to be raised as vegans. “There is a strong genetic link between dogs and wolves, and wolves are not vegans.”

CARU pet food uses only USDA-inspected meat and sources all products, including the added vitamins and minerals, from America. Pettyan provides full transparency to customers, he says the origins of the ingredients used in CARU’s stews and pet treats can be traced online.

“We are at the high end of pricing, but you cannot compare CARU stews with canned products,” says Pettyan. “It would be comparably priced to freeze dried, dehydrated or frozen premium food.”

Pettyan says the higher pricing is reflective of the care and attention put toward producing human-grade food formulas versus pet-grade formulas. “Our whole facility is very different from the typical pet food plant,” says Pettyan.

The stews are packed in Tetra Pak cartons instead of cans, which is a first in the North American pet industry. Unlike cans, the packaging provides resealable convenience to pet owners and is biodegradable, BPA-free and allows for a shelf-stable line without preservative use.

Rather than using the typical high pressure pasteurization method for cooking, CARU uses a gentle cooking process at low temperatures to preserve the nutrients in the food. Pettyan says the stews are produced in small batches to better control the safety of the product. CARU only produces a few hundred packages of stews each minute while the industry standard for canned pet food is 1,200 cans each minute.

The pet food recipe does not use by-products, grains, glutens, artificial preservatives or flavourings.

“Most ingredients eliminated by humans who try to improve their own diets, such as liquid smoke, sugar, unhealthy flavour enhancers or processed foods should also be eliminated from pet foods,” says Pettyan.

There is a big movement in the pet food industry and Pettyan says the key is to have a clean ingredient list while maintaining palatability.

Competitors in the pet industry will focus more intensively on pet health to meet the consumer demand. According to data research from The Canadian Pet Market Outlook 2014, higher prices for premium products will be justified by marketers and consumers. “The ongoing market investments of deep-pocketed pet market heavy hitters, as well as smaller entrepreneurs focused on pet health; promise to keep the pet market focused squarely on health for years to come.”