Importance of Aquaculture in Canada:
The latest available fisheries statistics1 indicate that the “farm gate” total dollar value of fisheries in Canada is ~ $2,954,459,000. The aquaculture landings in that year represented a value of $825,457,000 and the farmed salmon landings were valued at $598,845,000 (~72 per cent of total aquaculture). Globally, Canada is ranked 4th in terms of farmed salmon production2. Most of the farmed species are Atlantic salmon and grown in British Columbia, New Brunswick and Nova Scotia, with lesser amounts in Newfoundland (Table 1).

Nutritional Aspects:
Globally, aquatic food products account for over 40 per cent of animal foods produced3. The health benefits associated with seafood consumption have been well documented and in particular, pelagic species (fatty fish that migrate long distances in search of food, including salmon) which contain the highest levels of omega-3 fatty acids. Consumption of fatty fish has been shown to reduce the incidence of coronary heart disease (CHD) for men consuming one to two servings of fatty fish per week4,5. The high content of dietary omega-3 fatty acids (EPA and DHA) plays a major role in heart health and cannot be synthesized in the human body. Other health benefits of omega-3 fatty acids include reduction of sudden death6,7 and stroke8,9, improved visual and cognitive development10,11, alleviation of colitis12 and rheumatoid arthritis13, and a decreased likelihood of macular degeneration14. Very recently (June 10, 2014), the U.S. Food and Drug Administration and  the Environmental Protection  Agency recommended amounts of fatty fish consumed by pregnant women to be “at least 8 ounces and up to 12 ounces (2-3 servings) per week of a variety of fish that are lower in mercury to support fetal growth and development”15.  Previously, the FDA and the EPA recommended maximum amounts of fish that these population groups should consume, but did not promote a minimum amount. Over the past decade, however, emerging science has underscored the importance of appropriate amounts of fatty fish such as salmon in the diets of pregnant and breastfeeding women, and young children. These benefits are additional to the well-known presence of vitamins and minerals commonly found in most seafood as well as a number of other bioactives including a putative peptide(s) from Atlantic salmon shown to alleviate symptoms of type 2 diabetes16 as well as demonstrating antioxidant properties17, just to name two additional benefits.

Wild vs. Farmed?
The farmed salmon are “true” salmon (Salmo salar) or Atlantic salmon. The cultured species are raised from eggs with well-defined genetic composition, first in fresh water and then transferred into seawater where they grow and are eventually harvested before becoming sexually mature. The wild salmon are produced mainly on the Pacific coast and are not members of the genus “Salmo”. Commercially-available wild salmon (Coho, Pink, Sockeye, Chum, etc.) are primarily harvested from June to September and contain relatively low levels of fat during winter months when feed is scarce, becoming fatter when feed is plentiful in the summer. As a rule, farmed fish contain much higher fat levels than wild and therefore on a “live weight basis”, contain more omega-3 fatty acids. Fresh wild salmon are therefore only available in summer months but readily available year-round as frozen or canned products18. 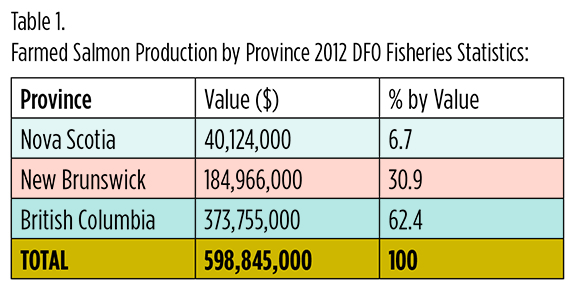 Both wild and farmed salmon are considered safe to eat with regard to environmental pollutants, pesticides and mercury content19,20; although concerns have been published, a number of studies have shown that the benefits of eating fatty species of seafood based upon the presence of omega-3 fatty acids, far outweigh the risks (see 20 for review).

Environmental Contaminants and Veterinary Drugs:
Methyl mercury (MeHg), an organic form of elemental mercury, and polychlorinated biphyenyls (PCBs) are not considered a health concern associated with eating either farmed or wild salmon. The MeHg levels in farmed salmon are estimated to be 0.014 μg/g fish21, well below the Health Canada guidelines (0.5 μg/g), and far less (~1/70th) than levels found in large predatory species such as shark, swordfish and tuna in which MeHg levels are magnified because these species are at the top of the food chain.

Polychlorinated biphenyls PCBs were manufactured globally until the late 1970’s and commonly used as electronic components until that time. They are now banned, having been found to cause cancer in animals and humans. Although a concern was raised in a rather famous study about elevated PCB levels in aquaculture salmon as compared to wild species22, a Canadian survey23 of domestic finfish, crustaceans (shrimp and crab) and Canadian shellfish (oysters, mussels) concluded that there were no statistical differences in the PCB contents of farmed and wild salmon and the PCB levels in both were well below the Health Canada guidelines. The cancer risk associated with PCB’s in salmon is considered small19 and the health benefit from the consumption of salmon far outweighs the risks.

Additional concerns have been raised about the use of aquaculture drugs and their residues in the food supply.  However, it appears that the industry is heading toward the substitution of vaccines and improved husbandry practices as preventive measures for bacterial infections. Used as directed, the clearance times for these drugs are well-established and pose minimal threats insofar as residuals in seafood.

Why are salmon pink?
Carotenoid pigments, specifically astaxanthin, (Ax) and canthaxanthin (Cx) are responsible for the red coloration in farmed salmon and trout. These pigments are produced naturally by aquatic plants (algae) and passed through the food chain to small crustaceans such as shrimp and ultimately to wild salmon, trout and char.  Salmon raised in captivity must be fed Ax/Cx-containing diets in order for their flesh to achieve the coloration similar to their wild counterparts. These pigments are identical to those found in nature. The pigment content of the feed is reflected in the depth of colour in the fillet and this is often measured with colour comparison cards or using an instrument called a “reflectance colorimeter”. The intensity of the colour is adjusted to suit the consumer, some markets preferring more and some less pigmentation.

Feeding Ax pigment is inefficient (retention < 15 per cent), and because of its significant cost, the mechanism of pigment retention is an important issue and not entirely understood. The salmon pigments do not accumulate in white-fleshed fish (cod, haddock, etc.) regardless of the pigment level in the diet.  It has also been shown that once internalized, the pigments bind to only one of the salmon muscle proteins, called alpha-actinin (24). Since all fish possess this protein, this could imply that the difference between salmon and white-fleshed fish is the ability to transport the Ax/Cx from the blood into the muscle cells.

Land-based Salmon Rearing
Currently, there is a great deal of research underway for land-based grow-out of farmed Atlantic salmon, thus obviating the negative effects of fish in sea cages.  The problems that would be eliminated by land-based aquaculture are:

• elimination of salmon escapes from the rearing facility, thereby eliminating interaction between farmed and native salmon;

• reduction of the risk of disease and parasite transfer to wild salmon; and

• reduction of the need for antibiotics and parasiticides as treatments associated with raising fish in sea cages.

There have been at least two major government studies on this subject in recent years: one by a Parliamentary committee25 and one by the Department of Fisheries and Oceans26. Although at the present time, it is difficult to predict whether or not land-based salmon farming can become a reality in Canada, Summerfelt and Christianson27 described a land-based feeding trial in which 23 tonnes of mature disease-free Atlantic salmon were brought to an average weight of 4.3 kg in 22 months and to 5.6 kg in 27 months. This trial used very low salinity and fish were sold commercially at an undisclosed price.

The Nagamis First Nation of Vancouver Island has reported on their successful “Kuterra” land-based RAS salmon farm that is now operational and aiming at a production volume of 450 tonnes/y at an estimated production cost of $4.77/kg. The fish will be marketed as a premium product using no antibiotics or pesticides. The current farm gate price for “head on”, gutted Atlantic salmon in Canada is approximately $6.00/kg but this is an international commodity and so other markets will affect the farm gate value.

Summary
The demand for seafood based on aquaculture is increasing steadily on a global basis as landings of wild stocks have reached a plateau and with rising fuel costs, harvesting of wild fish is unsustainable in the long term. Farming salmon affords the advantages of providing a constant supply throughout the year, at a reasonable cost, and with consistent quality and high nutritional value. There is little doubt farmed salmon is the most available natural resource of omega-3 fatty acids so important for cardiovascular health. However, the farmed salmon industry is rapidly changing, and for the better! Although farmed salmon are much better feed converters than any of their terrestrial counterparts (poultry, swine and beef), the industry has traditionally relied on marine aquatic resources for feed ingredients (fish meal and oil). The current research is focusing on sustainable land-based grow-out systems using plant-based diets and a recent report from the Norwegian Institute of Food, Fisheries and Aquaculture Research (Nofima) suggests that the use of marine proteins and oils is declining; currently, about 50 per cent of the feed ingredients in Norwegian salmon diets are plant based (vegetable protein and oil).  The Canadian salmon aquaculture industry has survived globalization and must now compete with countries with lower labour costs and in some cases lower feed costs.  In order to compete in the future, the Canadian industry will rely on science and technology to remain competitive and sustainable. Advances in fish nutrition using plant-based feeds and feed ingredients will play a large role.

In addition, as mentioned above, some recent studies at Canadian universities have shown that it may be possible to manufacture bioactive peptides as by-products from the farmed salmon industry and perhaps marketed as nutraceuticals. Such products could no doubt improve profit margins for aquaculture production. To date peptides prepared by the hydrolysis of farmed salmon muscle have been shown to display antioxidant activities with the ability to scavenge free radicals (superoxide and hydroxyl), chelate iron and inhibit linoleate auto-oxidation17. In addition, a low molecular weight fraction from the proteolytic digestion of farmed salmon waste has been shown to have anti-diabetic properties and may have applications to the treatment of type 2 diabetes, being able to reverse the effects of insulin insensitivity16.