Natasha Vandenhurk, CEO of Three Farmers, is on a mission to educate Canadians about camelina, an obscure edible oil from Europe

“It’s definitely been an uphill battle,” says Vandenhurk. “Oils are a very hard category for people to understand as it is. There are so many different facets to it, like smoke points and flavours and fatty acid profiles, and people don’t really understand that stuff so it’s really a process of education.” 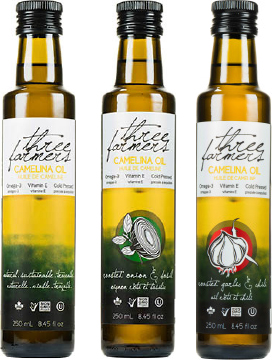 Three Farmers was started in 2007 after one of her neighbours, Colin Rosengren, came across the camelina seed at a convention in Saskatoon and saw an opportunity to do value adding in Saskatchewan. He approached two neighbours, one of whom was Vandenhurk’s father. They decided to grow the seed and after a few years of tweaking, were approved by Health Canada for novel food status. They started selling the original camelina oil in 2010, the same year Vandenhurk became CEO. Her sister, Elysia, is COO and a Red Seal Chef.

Vandenhurk has spent the last four years educating Canadians about the virtues of the oil, which is shelf-stable, has a high smoke point (making it versatile in the kitchen) and offers a rich nutritional profile including vitamin E and omega 3 fats. The seed is also cold-pressed to preserve its nutritional properties. The company is seeing slow and steady results. “This is our fourth year of sales and we’ve seen very good growth but it’s very steady.”

Aside from extolling the virtues off the oil itself, Vandenhurk has built Three Farmers on four pillars: value-added agriculture, sustainable production, healthy foods and traceable growing.

“I don’t know any other companies that are providing foods nationally that you can go to the website and phone your farmer,” says Vandenhurk. “We’re shipping off our first container to China and any customer that picks it up there can trace it back to my dad. That, to me, is unique and it’s the coolest thing about our brand. That’s really our point of differentiation,” she says.

The company’s focus on natural, sustainable and traceable seems to be serving the company well as Three Farmers recently had to move to a bigger office.  An appearance on CBC’s Dragons’ Den in 2012 certainly didn’t hurt. “It was huge for us,” she says. “When you’re marketing a product that is largely unheard of across the country, it can be pretty hard on the pocketbook so national exposure really did us well.”

Despite the company’s growth, Vandenhurk isn’t looking to move beyond the health food stores where Three Farmer’s products can currently be found. “We’re definitely not closing ourselves off to [big chain stores],” she says. “It really is a matter of awareness. The awareness of camelina oil is not yet there to have that pull in those mainstream stores. It’s just really hard to support those products given the marketing dollars you need to put in and we’re just not there yet.”