The benefits of coconut water have quickly catapulted the electrolyte-rich elixir from an exotic liquid sipped from the shell by locals and tourists to the epicentre of an entirely new beverage category: plant waters. And while coconut water consumption continues to grow and evolve in the natural beverage space, which intersects with the similarly expanding functional foods category, it now has lots of company.

In fact, the natural beverage category, which includes a number of ‘functional foods,’ is one of the fastest growing sectors in the beverage industry. As the vanguard plant water beverage, coconut water remains the leader in this category with sales of over $27 million from July 2013 to July 2014, according to a Tetra Pak-commissioned report.

Tom Zummo, CEO of Arizona-based True Me Brands, which makes True Nopal cactus water, chalks it up to the ‘you are what you eat and drink’ mentality. “Consumers are no longer just looking to just put empty calories into their bodies to fill them up and this philosophy is leading consumption habits back to nature.” True Nopal should enter the Canadian market soon, according to a company spokesperson. 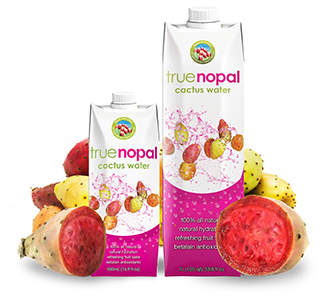 “Consumers are looking for healthier options,” points out Caroline Cyr, spokeswoman for the Federation of Quebec Maple Syrup Producers. “They are looking for novelty and new beverages. They want to have an experience of drinking purer and more sustainable drinks… that help them connect to nature.”

Plant waters’ growth is dominated by coconut water, but a sizable and quickly diversifying bevy of other entrants are knocking on the door. Right now, companies making birch, cactus, aloe, barley, maple and even watermelon water are looking to appeal to the healthy and low-calorie niche coconut water has carved out between sports drinks and pop. Imaginative new varieties are bubbling up the pipeline as quickly as entrepreneurs and established brands can formulate them.

This is in contrast to the experience of coconut water, which stood alone in the market as a plant water when it was introduced in North America in 1997, according to an internal report Tetra Pak commissioned in February 2014 from market-watcher Mintel. There is still no recognized plant waters category in marketing reports, but industry watchers expect that to change in the near future, especially with maple water swiftly making its way onto the scene.

This category has seen tremendous growth since inception – particularly in the past three years. In 2013 alone, according to the Mintel report, 264 variants of plant water were introduced (including different flavours from same brand), and there are currently 848 variants of plant waters sold worldwide, with 319 of those in North America.

“The plant water market keeps growing at the expense of soft drinks, and plant water [makers] are aiming to position themselves within this space by leveraging the equity of the word ‘water,’ while adding a natural element for functionality,” explains Riccardo Vellani, Beverage Category Manager for Tetra Pak U.S. and Canada.

In terms of functionality and flavour, each type of plant water has a unique nutritional and taste profile, and its makers tout varied benefits for body or beauty. For instance, coconut water benefits include its rehydration; aloe water is seen as a beauty boon for skin; birch water is viewed as an overall health tonic; and maple water is naturally very low calorie, containing over 46 essential nutrients, including minerals, peptides, amino and organic acids, and boasts a subtle flavour profile.

Also, some plant waters are made from sap (birch), some from juice (cactus) and others from pressed fruit (watermelon), which all have different properties and production requirements. For instance, coconut water begins breaking down quickly when exposed to sunlight, while maple water spoils quickly without the right preservation techniques. So as beverage makers look to enter or expand their presences in the plant water market and preserve the products’ functional properties, packaging is an important consideration for them from product preservation and consumer-appeal perspectives.

Packaging is Key to Freshness

Besides the production issues, the vast majority of coconut water now on the market is packaged in aseptic cartons for a variety of reasons. Aseptic UHT processing is gentler on the vitamins and minerals that plant water brands are selling, for example, and without refrigeration many plant waters would quickly deteriorate post-harvest without the protection of an aseptic carton.

“Cartons have become synonymous with coconut water,” notes Jeff Rubenstein, Vita Coco Senior Vice President of Marketing, adding that consumers who seek out healthy beverages are the same ones who care about sustainability and recyclability. “We think Tetra Pak provides a certain halo benefit for our brand.”

For the same reason, other plant waters are turning to aseptic cartons. Maple water has a long and storied history in Canada, where early settlers learned to tap maple trees for their sweet sap from the First Nations people. Yet only recently has it become commercially available. Since maple sap has a very short shelf life, usually spoiling after just a few days, until now, consumers needed to be geographically close to a maple grove to be able to taste fresh maple water.

However, after seven years of research and development, researchers at the Federation of Quebec Maple Syrup Producers, funded by grants from the Quebec provincial government and the Canadian government, developed a way to extend its lifespan, ensuring that it stayed fresh up to 18 months at room temperature. This was due in no small part to the advances in packaging and processing technology developed by Tetra Pak, notes Cyr. Launched in 2013, there are four brands of maple water on the market – Oviva, Seva, Maple3 and Wahta, with more on the way.

As beverage manufacturers begin to explore or expand their presences in the functional plant waters market, they should consider the role of packaging in the preservation and promotion of these ephemeral essences of nature. Tetra Pak’s Product Development Center in Denton, Texas, makes it possible to process small batch test runs for these new products before scaling them up and shipping them out to consumers, who remain increasingly thirsty for waters that offer more flavour and functionality than what is currently on tap.

Share
Previous Maintaining Gut Health with Probiotics
Next Under Attack