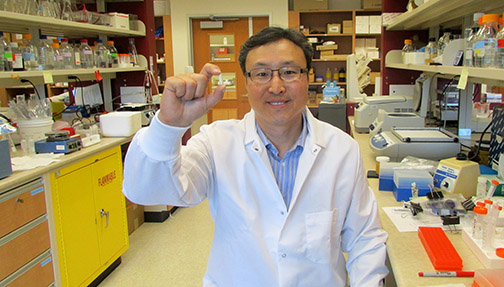 Since the discovery of celiac disease and gluten intolerance, the often limited and limiting gluten-free diet has been the only way for the estimated 333,000 Canadian sufferers to avoid the debilitating symptoms. Now, thanks to University of Alberta researchers Hoon Sunwoo, an associate professor from the Faculty of Pharmacy and Pharmaceutical Sciences, and Jeong Sim, a retired professor from the Faculty of Agricultural, Life & Environmental Sciences, a gluten-neutralizing supplement may be on the way.

“Eleven to 12 years ago, one of my… friends, who has celiac disease, couldn’t go out to dinner with me because he was really concerned about food that contained gluten,” says Sunwoo. “At the time I was not aware of what celiac disease was or even gluten products, but he explained it to me. I started to study why gluten was causing autoimmune disease for people who cannot tolerate it and many of its side effects.”

The primary culprit in celiac disease is gluten, a binding protein found in wheat, barley, and rye that helps bread and other baked goods take shape. For the affected, ingested gluten damages the absorptive surface of the small intestine and, once damaged, the body is unable to properly absorb essential nutrients such as proteins, fats and vitamins. Even with improved diagnoses and testing methods, celiac disease is said to have increased 400 per cent since the 1950s, an increase that may be too large to attribute to greater awareness alone.

“At the time, I was working on IgY (Immunoglobulin Y) that protects against E. coli, salmonella, and Listeria,” says Sunwoo. “The IgY antibody is in chicken egg yolk, and the purpose of this antibody is to protect the newborn chicks from microbial effects. IgY comes from the mother hen’s bloodstream and is transferred into the egg yolk to protect the chicks. Since IgY successfully and effectively neutralized E. coli in the system, why not gluten?”

While researchers of celiac disease have been stumped in their search for a cure or a treatment, Sunwoo and Sim appear to have found a way to at least prevent the negative side effects of ingesting gluten. The researchers have targeted gliadin, a component in gluten that helps it rise when baked and identified it as a toxic agent for those with gluten intolerances. By immunizing egg-laying hens with gluten proteins, a protective, natural supplement develops in the egg yolk that prevents the absorption of this havoc-causing protein. The eggs and the egg yolks are then harvested for these anti-gluten antibodies.

“My technology increases a specialty in the IgY that protects against gluten in the egg yolk,” says Sunwoo. “It is not treating the small intestine. It is preventing the symptoms of celiac disease. [Sufferers] are protected by a gluten-free diet in the household, and homemade gluten-free diets are pretty safe; however, when they have the chance to go out for dinner, socialize with their peers, and they have no choice but to have gluten-containing food, this pill can be taken five to 10 minutes before they start to eat the food to prevent the effects.”