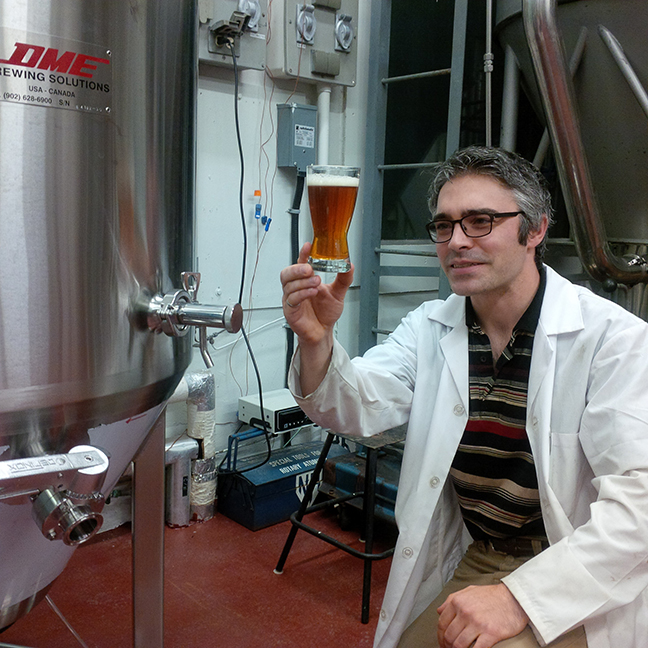 In a process almost as old as human history itself, malted barley is ground up into small chunks, mixed with water and heated up to form mash. The mash sits for an hour or so to let the enzymes break down the starches in the mixture into sugars. The sweet liquid left over is drained off into a brew kettle where it is boiled with hops to sterilize it. This part of the process, referred to as the brewing process, also ensures that the unique flavour of the hops is extracted. Different ingredients can be added at this stage, such as roasted barley and other flavours.

After brewing, the liquid is cooled down to around 20 C, depending on what type of beer is being made. Yeast is added to eat up the sugars left over from the starches and those sugars are converted into ethanol. That, more or less, is how beer is produced.

“Most of that process has been well studied for thousands of years now… but a lot of the particulars on exactly how the yeast dispenses some of the byproducts, under what conditions, what are the extremes that we can bring them to,” MacIntosh says, “That’s what we look at here.” 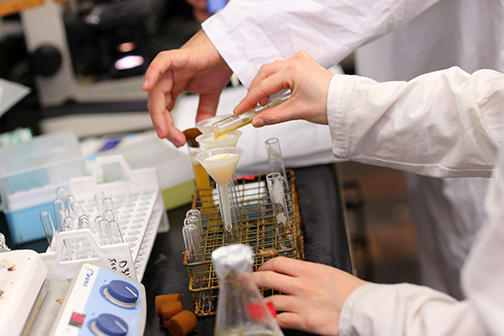 CIFT used to stand for Canadian Institute of Fisheries Technology and, as the name suggests, the main research focus was Atlantic Canada’s seafood industry. Eventually that focus shifted to include food research in general. But as people have retired, CIFT lost valuable expertise that was hard to replace, and there wasn’t a lot of growth happening in the fishing industry. It was then that Professor and CIFT Director Allan Paulson came up with the idea of expanding the research focus beyond seafood.

MacIntosh had studied the fermentation process from a pharmaceutical viewpoint while working on his masters. While completing his PhD at Dalhousie, MacIntosh shifted his focus to the brewing industry, which was growing in Nova Scotia. His PhD supervisor, Dr. Alex Speers, was an integral part of the formation of the new fermentation research institute. Speers has many years of experience with brewing-related research and had maintained ties with the large breweries he had worked with over the years. With Speers on leave and working at a university in Scotland, Paulson hired his former student MacIntosh to get the brewing research simmering.

“Paulson saw a lot of this potential, as we’ve been doing some of this [fermentation] research for years,” MacIntosh says. “As a certified sommelier, he was somewhat familiar with the industry, so he took to the initiative to form the fermented products institute.”

An old food science pilot plant, which had been in operation for many years, was completely refurbished to serve CIFT’s new fermentation research. Ninety per cent of the existing equipment was ripped out and the whole facility was repainted. A two-barrel fermenter, numerous small bioreactors and other small pieces of equipment were installed, all sized for a pilot-scale brewery. The plant has been in operation since December 2014.

“We now have a small microbrewery and we have some analytical capabilities,” Paulson says. The fermentation research team mainly works with small local breweries holding educational workshops and offering their analytical capabilities. They also have a part-time brewmaster on-site who has 30 years of experience working for one of the local brew pubs.

“[The brewmaster’s] role is to work in the pilot plant, to make beer, to make test batches, but also to teach either beginning brewers or people that want to get into brewing,” Paulson says. “If they want to try out some equipment they don’t have, then he can show them how to do it. Or he can give them advice on what might be worth buying or what might not be worth buying. He’s kind of a sounding board as well.” 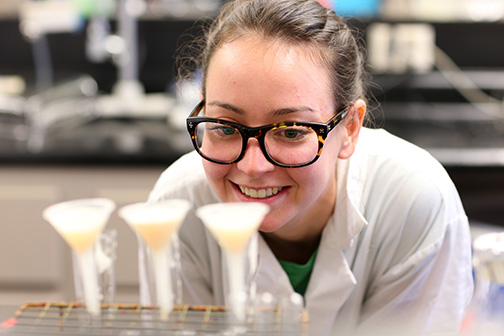 Small breweries might come to the institute with a production problem, or wanting to do a test batch to see if consumers will like it. If not, the brewery hasn’t spent a lot of time and money testing it; if it does, they can scale up production.

“The long-term objective is to have an interprovincial network of organizations… focused on assisting the industry, not just for their research and development needs, but to address educational needs,” Paulson says.

Although the institute does work with some major breweries, it does most of its work with small craft brewers. Craft beer has enjoyed increasing popularity in Canada in recent years as customers look for more variety, so much so that larger brewers, like Molson Coors Canada and Labatt Brewing Co. Ltd., have launched their own craft beer brands.

Craft brewers have a certain advantage over major players however, when it comes to the need to put out a consistently uniform product. “When you’re a big brewing company and you have a lot of different breweries, you have to put out a consistent product, so that it tastes the same tomorrow, next week, next year,” Paulson says. “Craft breweries, on the other hand, they don’t have those restrictions. A batch they make today can easily be a bit different from a batch they make next week or next month. People expect that with craft beer.”

There is a lot happening in the craft beer industry. Brewers are looking at old recipes and experimenting with new ingredients, new varieties of barley and new breeds of yeast. Everything from buckwheat malt, to apple cider, to herbs can be introduced into the brewing process. Even a slight variation in the fermentation process can result in a vastly different product. CIFT’s most surprisingly successful experiment with flavoured craft beers has been the addition of spruce needles, MacIntosh says. “They took out some of the oils from the needles, and they were able to get a very Christmassy kind of beer,” he recalls.

There is even the possibility of getting in on the functional foods trend with craft beer. MacIntosh has students studying the introduction of antioxidants into beer.

“We already know that, comparable to wine, there are antioxidant components of beer in general. However, if we were looking to add in additional ones, through the addition of specific fruits – blueberries, haskap berries – we wanted to see how that would survive in the fermentation process.”

“What we’re attempting to do at the fermentation institute is provide a lot of support to the growing craft brewing industry here,” MacIntosh says. The greatest task will be figuring out how to translate new technology from other fields into the brewing industry, he says, especially at a local and smaller scale.

At the moment, the institute’s efforts have been focused on the beer industry simply because that’s where most of its expertise lies. The industry in Halifax has also been growing in leaps and bound, with new breweries opening up all the time. With their mandate to work with local industry, CIFT’s involvement in the beer industry was inevitable.

As far as wineries go, it’s a different story, Paulson says. Most of wineries are located some distance from Halifax and because of the seasonal nature of the industry you are limited in what you can do. “You have one vintage a year and you basically get one crack at making your wine, whereas with beer you can do a batch every week,” Paulson says.

Still, they have the facilities to accommodate analysis should a winery wish to use their services, Paulson says. As the facility expands, so too will the mandate.

“There’s always something new on the horizon. We want to be in a position to respond to the requests of industry and also be ahead of the curve and to provide a place where we’re training people to do analyses [and] to brew beer.”

Brewers are looking at old recipes and experimenting with new ingredients, new varieties of barley and new breeds of yeast. Everything from buckwheat malt, to apple cider, to herbs can be introduced into the brewing process.

Share
Previous Inspired By Inulin
Next Interview with Ryan Cochrane