With 2016 being the International Year of the Pulse, it’s meat versus pulses. Or is it?

They are a superfood, Canada is their second-largest producer and their largest exporter in the world, they are marketed as a healthy meat alternative, and, in 2016, pulse crops will gain international exposure through the UN’s International Year of the Pulse campaign. With global interests focused on pulses, will the Canadian meat industry be forced to react? Is it preparing for stiffer competition in the protein market?

“Pulses are extremely healthy, as are meats, and promoting one healthy food does not, and should not, need to be at the expense of another,” says a spokesperson from Canada Beef, the n 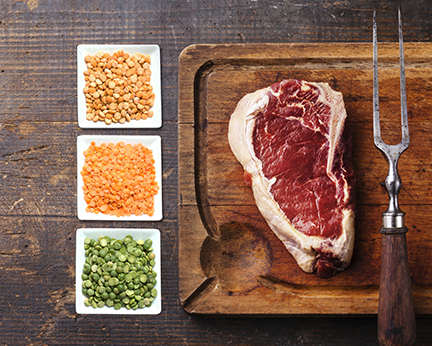 ational organization responsible for domestic and international beef and veal market development. “There is room in the diet for both pulses and meat, and, in fact, one complements the other from a culinary and nutritional point of view.”

Based on the most recent information available, the consumption numbers support this. According to the 2004-05 Canadian Community Health Survey (CCHS), the average Canadian adult’s energy from protein intake was 16.8%, halfway within the 10% to 35% Acceptable Macronutrient Distribution Range (AMDR). Additionally, though one in four Canadian men meet or exceed the maximum recommended daily meat intake set by the Canada Food Guide, the large majority of males and females consume acceptable amounts between the one and three recommended servings of cooked meat.

On average, Canadians eat approximately one serving of chicken per day (80g), less than one serving of fresh red meat per day (52g), and then small quantities of other forms of protein, like turkey, fish, eggs, and other meat alternatives to make up the average 200g total. Most Canadians could eat one more serving of meat or meat alternatives per day and still be within the recommended range as set out by the Canada Food Guide. Therefore, considering that only 13% of Canadians consume pulses daily, according to a 2010 Ipsos Reid report, and this group only eats approximately one serving of pulses per day on average, there is plenty of room to grow pulse consumption without dramatically decreasing meat consumption.

Over the past 30 years, the protein market in Canada has gone through significant changes. During this time, beef consumption declined 28% and pork 26%, while chicken consumption increased 69%. The last 10 years, however, tell a much different story. Chicken consumption since 2004 has remained relatively stable, and, although both pork and beef consumption have decreased over this period, it has been minimal year over year. The Food and Agriculture Organization of the United Nations (FAO) projections for the next 10 years suggest that this relative stability will continue with each industry growing slightly.

Chicken’s availability, low cost, and versatility have made it the most popular meat in North America. This is the reality for many places around the world and it is not expected to change any time soon. Here in Canada, even though red meat production and consumption have steadily decreased over the past decade, Canadians have not abandoned their love of beef or pork. The relatively high consumer demand suggests that the declining numbers are more reflective of changing market conditions rather than taste or preference. 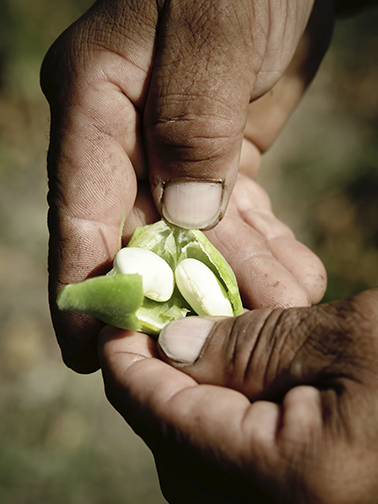 But pulses are a different story. Pulse consumption in Canada remains low due to a lack of awareness, even though Canadian crops represent approximately 35% of the global pulse trade. Used primarily for pet food, aquaculture, and livestock diets, they remain an underused commodity for the average Canadian. “Very few consumers know what pulses are and very few understand why they should care,” explains Gordon Bacon, CEO of Pulse Canada. “When they do know what they are and why they should care, they either don’t know how to cook them themselves or don’t know what food products they can consume that have pulses in them. That’s both our big challenge and our opportunity.”

Having an international promotional platform is unquestionably a great opportunity for both pulse crops and the farmers, but the impact that the UN’s “International Year” designation has had on the beneficiaries of the past is difficult to gauge. In 2013 for example, quinoa was given the title and saw its trade and consumption numbers rise considerably, with Peruvian quinoa exports increasing an astounding 61%. But can pulse crops expect the same reception?

“We looked very closely at quinoa. We looked for role models, at what we saw as successful campaigns, and a lot of it is timing,” says Bacon. “With quinoa, did sales skyrocket simply because of a UN designation? What role did celebrity endorsements play, social influencers, or the media? There’s a whole range of reasons why things suddenly become popular.”

Yet the timing may be more opportune than Pulse Canada is willing to admit. There is a vast collection of well-voiced negativity about the meat industry, and the increased exposure of pulse crop benefits is sure to bring with it an increased exposure of those concerns, valid or not. Whether it is health, wealth, or environmental, the advantages of pulse crops are often positioned in relation to the perceptions about the meat industry, the solution to a problem, a healthier and more affordable protein option.

But despite the dizzying amount of conflicting reports, horror stories, and public perceptions about the impacts of meat, specifically red meat, on consumer health, both the evidence and the major health agencies tend to agree that eating unprocessed meat is perfectly healthy. Currently, the average Canadian’s meat intake is well within all recommendations as set by each of Health Canada, the World Cancer Research Foundation, and the Canadian Cancer Society.

“Advice to limit unprocessed red meat is simply not in line with the body of evidence about red meat and health,” says Canada Beef, citing The European Prospective Investigation into Cancer and Nutrition (EPIC). “[EPIC] found no association between eating unprocessed red meat and any cause of death, including cancer or heart disease. In fact, the European study found higher mortality rates in people who consumed very little or no red meat. Experts agree that the healthiest diets consist of balance and moderation, in line with Canada’s Food Guide.”

Unrattled by its detractors or the oncoming global attention for pulses, the meat industry remains secure in its relationship with Canadian consumers. “This is not a new initiative,” says Robin Horel, President and CEO of the Canadian Poultry and Egg Processors Council of Canada. “Non-meat alternatives have been a growing trend for some time and yet chicken and egg consumption, in particular, have still increased throughout this period.”

The International Year of the Protein

So when the calendar turns over to 2016, it would seem unwise to expect a hard-fought battle for protein marketshare. Rather than alternatives, the pulse and meat industries tend to see each other as complements, anticipating opportunity in the New Year, not conflict. For Pulse Canada, the success of pulse crops is closely aligned to that of other foods.

“Rather than a versus arrangement, we talk a lot about pulse partnerships,” says Bacon, an ideology that will certainly bleed into its International Year of the Pulse marketing. “Our focus is on what role we can play in diets, and that could easily be a pairing of meat and pulses. It could be lentils and ground beef. It could be a BBQ with baked beans. It could be many different combinations.”

He adds, “Are we focusing on meat? No. Are we gunning for wheat? No. We’re focusing on having pulses speak for themselves.”

Canada Beef looks at 2016 in much of the same light. “It is unfortunate to market one as healthier than the other and would be irresponsible nutritional advice to do so. A healthy diet is made up of a variety of foods because each contributes different nutrients,” it says. “Compare meat and pulses: they are both nutritionally dense, but each offers something different as part of their nutrient package. For example, where a legume might offer fibre, meat offers B12. Where a legume might be higher in folate, beef is higher in zinc. The iron in meat, poultry and fish is very easily absorbed in our bodies whereas the iron in plant-based foods like pulses is not.”

While the competition between pulses and meats seems unlikely or tepid at most, the International Year of the Pulse is sure to bring with it greater protein awareness. Because pulse crops are such a rich source of it, the benefits of protein and a well-balanced diet will definitely garner some attention, and this could have a positive trickle-down effect for all proteins.

“Will we get drafted along in the increased protein craze?” asks Horel. “It certainly could happen. Will this rise in tide lift all boats? I don’t see how it could hurt. This has been a trend that we’ve been seeing for some time and it’s been going in our direction.”

Both the poultry and beef industries support the increased exposure for pulses, hoping that they replace foods that lack nutritional value in Canadian diets, foods that currently take up 22% of total calorie intake for the average adult.

“It would be a better perspective to market pulses as a healthy addition to a diet, particularly if they displace highly refined, processed and nutrient-poor foods,” urges Canada Beef. “It would be a concern for Canadians to abandon naturally protein rich foods in favour of protein supplemented foods, as the latter lack the complement of nutrients that naturally protein-rich foods would deliver.”
For more information about pulses and their health and environmental profile read http://canadianfoodinsights.com/2015/04/02/finger-pulse/