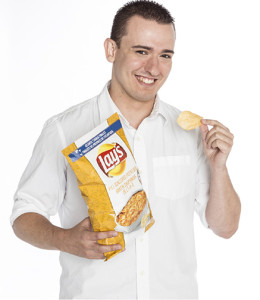 The P.E.I. Scalloped Potatoes flavour has been selected as the 2015 winner in the Lay’s Do Us a Flavour contest.

Winner Jordan Cairns was inspired by Atlantic Canada’s reputation for potato cultivation as well as a fond memory of Friday night family dinners to create his P.E.I. Scalloped Potatoes flavour. Jordan will receive $50,000 plus one per cent of his flavour’s future sales.

“I’m excited to be named this year’s winner,” says Jordan. “It’s incredible to think that a flavour inspired by a childhood memory will join the Lay’s lineup in stores across Canada.”

Earlier this year, Lay’s asked Canadians to submit their ideas for the next great potato chip flavour inspired by a region in Canada. In August, four finalist flavours were revealed and Canadians were invited to select the winner by trying all four and voting from August 11 to September 30.

The Lay’s Do Us a Flavour contest has been held in numerous countries around the world. Since 2013, the Canadian contest has received more than 2.7 million flavour ideas from across the country.

Share
Previous Positioning High-Quality Plant-Based Protein Sources For The Food Industry: Do we need to adopt new approaches?
Next An education in food