Iconic brand aims to stand out from its competitors

From Tony the Tiger to Buzz the Bee, the right mascot can be an essential part of creating lasting brand recognition for any food product. It was with this in mind that Planters Canada, owned by Johnvince Foods, launched its new peanut butter product with a focus on its iconic, monocled, Mr. Peanut.

“It’s never been launched before in Canada,” says Don Lock, Vice President Sales & Marketing at Johnvince Foods, explaining that the U.S. Planters brand launched a peanut butter in 2011. “The formulations are not linked together, they’re totally different.”

The company says compared to its Canadian competitors, Planters Canada peanut butter has a higher amount of peanuts, resulting in a lower concentration of sugar and other ingredients. “It was important that we launch something that would resonate, ‘peanuts first,’” Lock says. “We created a formula that we thought would work best with Planters.”

The reception, Lock says, has been positive, with customers remarking that the taste is “exactly what they’d expected,” and noting that the move to peanut butter is a no-brainer. “The feedback we’re getting through our social media has just been outstanding,” he says. “Everybody just loves it.”

Johnvince Foods purchased the Planters brand from Hershey Canada in the mid-90s, and while Kraft Foods owns the American brand, Planters Canada exists separately, with its own line of products.

Since its purchase of Planters, Lock says Johnvince Foods has seen the Planters Canada brand grow extensively. “Today, as you see, we’re in peanut butters, confectionaries,” says Lock. “All those never existed back in the day. From where we bought it to today, it has grown substantially.”

The Planters brand is not the company’s only source of revenue. As peanut sales have declined in the last three or four years, sales in dried fruit and confectionary chocolate have helped the company “balance things out.” Johnvince products are all distributed out of a 350,000-sq.ft. facility in Toronto.

Lock says the company will continue to focus on Planters. “We have some other regional brands… Planters, by far, is our flagship brand.” 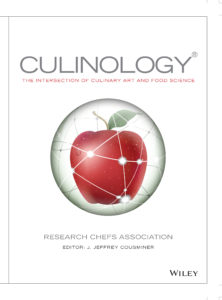 The Research Chefs Association (RCA) published its first comprehensive textbook, Culinology: the Intersection of Culinary Art and Food Science, to support professionals and students who want to take their careers to the next level.

How does a food item go from the kitchen under a chef’s guiding hand, to a new product on a supermarket shelf? How does a new product developer produce food that won’t perish before it reaches the consumer? And how does a chef who has mastered the most creative menu items take one and produce it for mass market tastes? The answer is found in the study of culinology.

“Simply put, culinology helps us to understand how and why things happen to food,” explains Jeffrey Cousminer, Editor. “By leading you through each step of new product development, this book will help you begin thinking like a culinology professional by explaining what it really takes to bring a product to market.”

The book was published in February 2016 and is ideally suited for the culinary arts or food science student interested in learning more about food research and development through the study of culinology – the blending of culinary arts and the science of food.