Pulses are the dry seeds of legumes that contain small amount of fat, while those with high amount of fat are referred to as leguminous oilseeds (soybean and peanut). But the term legume covers all leguminous plants such as dry seeds, green pots/seeds, leguminous oilseeds and other legumes (clover and alfalfa), and food legumes include only dry seeds and edible immature pods/seeds. Seven pulses are important in human nutrition of which five (peas, beans, lentils, chick peas, fava beans) are important in the global trade while the other two (cowpea and pigeon pea) are usually consumed where they are produced except for a few cases, e.g. black-eyed pea is traded in some parts of the Americas1. Canada is a strong exporter of pulses with about 25% of all Canada’s exports at an estimated value of about CAD $484 million2. The world production of edible pulses is about 60 million tons (~US$22 billion), while the global trade of pulses is nearly US$7 billion1. In general, pulses are present in almost every diet in many countries and regions around the world such as India, Middle East, Latin America and others but they are less consumed in North America and Europe. One of the key factors that limit the consumption of pulses in Europe is the lack of an adequate level of innovation in developing products adapted to modern life3. On a global basis pulses provide smaller amounts nutrients at 7.8 kg/capita/year, 74 kcal/capita/day and 5.1 g protein/capita/day as compared to cereals at 120 kg/capita/year, 880 kcal/capita/day and 25.8 g protein/capita/day, respectively4. This indicates that there is still room for improvement to boost consumption of pulses especially in Europe and North America. In addition to the basic nutrients, pulses also contain other constituents known as bioactive compounds which could have health-enhancing and/or disease-prevention properties such as polyphenols, phytoestrogens and pigments. Other substances referred to as anti-nutritional compounds such as enzyme inhibitors and raffinose family oligosaccharides are also present in pulses. The bioactive and anti-nutritional compounds could undergo trivial or major changes during processing subject to pulse type. This article is intended to provide an overview about the bioactive and anti-nutritional compounds found in pulses and how cooking and processing could change their content and composition.

Bioactive and anti-nutritional compounds in pulses

The term bioactive compounds (BCs) denotes food components that deliver positive physiological functions to humans, while anti-nutritional compounds (ANCs) refer to those food substances that negatively interfere with the digestion and absorption of nutrients. This classification, however, is debatable since currently some of these compounds could offer both beneficial and adverse effects. These compounds could also interact with each other which may affect their physiological effects. Pulses contain a wide array of BCs and ANCs exhibiting diverse chemical structures ranging from small molecules to macromolecules (see Table). The levels of BCs and ANCs in pulses vary substantially between types and varieties and are influenced by environmental and genetic factors, processing and storage conditions. The majority of BCs and ANCs are secondary metabolites produced by plants primarily as a defense mechanism against invasive predators and/or environmental stress. The following is a list of BCs and ANCs commonly present in pulses:

Phytic acid is the main storage form of phosphorus in plants. It is present in pulses at levels ranging from 0.4 to 2.3%5. It is associated with proteins and thus concentrated with the protein fraction from pulses. Phytic acid is known as a chelating agent and thus it could impair the absorption of iron, zinc and calcium. It may also act as antioxidant, anti-cancer and in lowering blood sugar6.

Phytoestrogens include three classes, isoflavones with soybean being the major source, lignans and coumestans in beans and peas. They are hormone-like substances and mimic estrogen effects. Coumestans are less common in the human diet than isoflavones and lignans.

Polyphenols: The main polyphenols in pulses include flavonoids, phenolic acids and tannins. They are considered potent antioxidants in vitro and in vivo and also linked with reduced risk of oxidative stress, inflammation, cardiovascular disease, cancer and osteoporosis5. Ferulic is the main phenolic acid in pulses while catechin and epicatechin are found to be the dominant phenolic compounds in legumes followed by chrysin, genistein and quercetin.

Raffinose family oligosaccharides: These are α-galactosyl derivatives of sucrose. The most common galactose-containing oligosaccharides are the trisaccharide raffinose, tetrasaccharide stachyose and the pentasaccharide verbascose. These oligosaccharides can be hydrolyzed into D-galactose and sucrose by the enzyme α-galactosidase, an enzyme that is not found in the human digestive tract. Thus these substances pass into the lower intestine where they are fermented by bacteria into gases leading to the flatulence associated with pulse consumption.  Dietary supplements containing α-galactosidase are commercially available and are being used to improve digestion of pulse foods and reduce flatulence.

Saponins are found in legumes such as soybean, peas and beans varying from <1% to 5%5. They derive their name from the Latin word sapo or soap which is related to their surface-active detergent properties and ability to foam in aqueous solutions. Saponins have traditionally been considered as anti-nutritional factors; however, there is increasing evidence of their health benefits in cholesterol-lowering and anticancer properties.

Lectins also known as agglutinins are carbohydrate-binding proteins highly specific for sugar moieties. There are four groups of lectin including legume lectins, monocot mannose-binding lectins, chitin-binding lectins and type-2 ribosome-inactivating proteins7. Pulses contain higher amounts of legume lectins type than the other lectin groups. Lectins are hemagglutinins of all human blood types (A, B, AB, and O) with different activities but they may act in preventing certain cancers and activation of innate defense mechanisms7.

Enzyme inhibitors: These include amylase, trypsin and chymotrypsin inhibitors. They may be considered either anti-nutritional or disease-preventing factors subject to health of individuals. For example, amylase or trypsin inhibitor could be used as a therapy in controlling body weight via slowing down digestion of starch or protein in obese individuals. But it could be anti-nutrient for individuals with protein deficient.

Effect of processing on bioactive and anti-nutritional compounds

In Canada, pulses are primarily consumed as canned foods. However, with the human migration happening in Canada and the USA, culinary pulse-based food products from abroad have been introduced into the food market such as falafel (fava bean burger), hummus (chickpeas paste), roasted chickpea or peas, etc. Consumption of these products was first limited to ethnic groups but at present some of them have become popular and mainstream. Additionally, with the advances in processing technologies and product development, several pulse products have been developed or under development. These include veggie burgers, pulse-based snacks, and gluten-free pasta from pea or bean. Thus, increasing awareness regarding health-enhancing properties of pulses along with the development of innovative products would boost the consumption of pulse-based foods in Canada.

Thermal processes such as canning, pressure cooking, microwave cooking, traditional or stove-top cooking, roasting, and others are used in cooking or processing pulses. It is important to understand changes occur in BCs and ANCs in pulses during these thermal processes. Lectins and enzymes inhibitors are proteins which could undergo denaturation by thermal processing prior to consumption. Protease inhibitors show different degrees of susceptibility to various processing treatments8. Thus processing technique and conditions used to denature protease inhibitors could vary from one pulse type to another. For lectins, some of them are heat-labile and others could be resistant to mild heat treatments. Once again, type of heat (dry versus wet), treatment conditions and pulse type could determine the level of lectins removal.

Thermal treatments have considerable effects on saponins in pulses. About 2-5% of saponins can be lost from chickpea during cooking compared to about 6-14% from lentil8. Some saponin compounds are heat-labile and could undergo conversion or degradation into other compounds. Little is available about the degraded products of saponins.

Thermal processing could cause noticeable effects on polyphenols, pigments and isoflavones in pulses through thermal degradation and chemical modifications such as oxidation and isomerization. The greater degree of thermal processing the higher levels of compound loss but it still remains unclear how much BCs and ANCs could be lost as many factors contribute to this alteration processes including processing conditions, food matrix structure, and type of BCs/ANCs. Factors that help reduce polyphenols in pulses during cooking include soaking prior to cooking and draining of cooking water9.

Soaking is a pretreatment which is often used in cooking and processing of pulses. Many of the BCs and ANCs could be removed during this treatment in particular water soluble compounds such as raffinose family oligosaccharides, phytic acid and lectins. About 17-31% of raffinose and stachyose and 27-35 % of sucrose were lost during soaking of beans for 12-14 hours in tap water10. 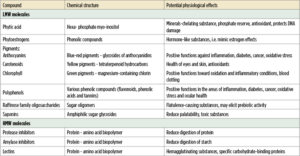 Germination can also be used to modify the compositional and structural properties of pulses including BCs and ANCs. The concentrations of polyphenols, anthocyanins and isoflavones changed in germinated beans11. After seven days of germination, the total concentration of anthocyanins was similar to that of raw beans but other anthocyanin compounds were formed. It also resulted in an increase in the content of isoflavones, while the content of polyphenols altered (i.e. increase or decrease) subject to the type of polyphenol compound.

Micronization is an infrared heating process that has been used as a pretreatment in processing of pulses to reduce cooking time and improve pulse quality. Little is known about how this pretreatment could affect BCs and ANCs in pulses.