The Dumas high temperature combustion technique was first introduced in 1833 and although it was initially found to have shortcomings, current, modern-day fully automated systems are fully compliant with internationally recognized methods that include AOAC 99 series, CS Ba series, ISO 16634 series and more.  There are key advantages that the Dumas-based method has to offer when compared with Kjeldahl and include a significant reduction in analysis times of a few minutes per measurement versus an hour while not requiring the use of hot acids or toxic chemical catalysts.

Results
When calculating the nitrogen content by the Dumas technique, the results are higher than Kjeldahl because Dumas determines organic nitrogen compounds along with nitrates and nitrites. In contrast, the Kjeldahl method only converts organic nitrogen and ammonia and has limitations for certain organic compounds such a Heterocyclic N compounds. In addition, Kjeldahl can be prone to experimental error because of different catalysts, sulfuric acid volumes and heating times required for different sample types. Dumas is not affected at all by this as it is a combustion technique.

Reagent Costs
Kjeldahl methods require the use of acids, catalysts and other chemicals that result in both reagent costs and expensive disposal fees as the resulting wastes are hazardous. In contrast, the Dumas combustion system by select manufacturers conserve helium or argon carrier gases along with oxygen combustion gas during operation. The Dumas system pictured below incorporates a long-life copper catalyst and minimal consumable costs. Moreover, the method does not produce any toxic waste and only results in the production of ash which can be disposed by conventional means.

Following is a direct comparison between DUMAS and Kjeldahl on assorted foods: 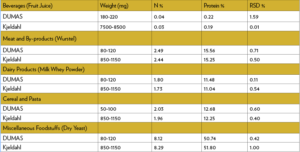 Summary
The mean average precision as noted above is different for the two techniques:  0.58% for DUMAS and 0.418% for Kjeldahl. The higher RSD for DUMAS can be attributed to the much smaller sample size of between 50-200 mg.

Laboratories conducting protein/nitrogen content for nutritional analysis on a wide range of sample types and varying throughput requirements can consider the following as a guideline to select the best solution.

Paola Ornaghi is an Analytical Chemist with VELP Scientifica in Italy