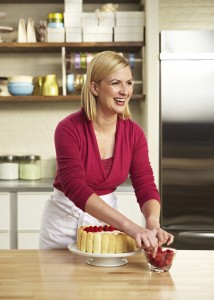 Celebrity chef Anna Olson’s love of baking began with her grandmother, a woman she describes as having a passion for baking to share with others. Olson picked up this passion and made into a successful profession.

After studying culinary arts at Johnson & Wales University in Colorado, she moved back to Canada to work as a pastry chef. Olson’s culinary philosophy is based on a common-sense approach to cooking and baking with the seasons. Although many of her culinary creations are rich and decadent, she advocates balanced eating and loves to include fresh, locally-sourced ingredients in her recipes.

Over the last 10 years, she’s authored seven bestselling cookbooks and hosted a series of hit television shows that have aired across the globe. Olson can currently be found on Food Network Canada’s Bake with Anna Olson where she teaches the audience baking techniques while making everything from cheesecake to chocolate pastry.

What inspired you to become a pastry chef?
In terms of my love of baking, my original inspiration was my grandmother. Her passion for baking to share rubbed off on me. But my love for baking is simply that culinary exploration. I studied culinary, not baking, in school but it was the science and precision of baking that drew me in.

What’s been the most exciting moment in your career so far?
Starting my career on television was probably the most life-changing but also scariest. I still get very nervous in front of the camera, but it creates opportunities through networking and events. Before, I couldn’t imagine that getting in front of a camera and fighting my own nerves to talk about blueberry buckle, crepes and tortes would lead to other things.

What’s your favourite meal to make?
I’m a seasonally motivated cook so I can’t pick just one thing, but if it were for spring or summer, it’s got to be grilled items. I love a grilled rib-eye steak on a charcoal barbecue with a ripe tomato salad that has sliced red onions, fresh raspberries, blue cheese and then depending on what time of year, I’ll add in some extras.

What would you say is the most underrated pastry?
The croissant. We all identify it with French cuisine, but what we typically get here in North America is just a shadow of the true French croissant.

What is the hardest part of developing a new recipe?
Pushing the boundaries. It takes practice to know when you can bend the rules and when you’ve pushed them too far, but that said, you learn from your mistakes and then you make a better recipe.

You make an effort to promote nutrition and balanced eating, why is that important for you?
I don’t believe we should deprive ourselves from treats. If you’re making those sweet things from quality ingredients, respecting the seasons and using what’s at its best, then it’s going to be far more satisfying and you don’t need that third, fourth and fifth portion for it to be fulfilling. If you take things out of your diet, you’ll end up missing it and eating more.

If you weren’t a chef, what would you be doing?
I would either write an award-winning fiction novel or be a dance DJ like Deadmau5. I could wear a giant chef’s hat over my head!