Finger on the Pulse

There’s more to pulses than soups and salads as both the U.N. and industry look to raise awareness and celebrate the role of beans, chickpeas, lentils and peas in feeding the world 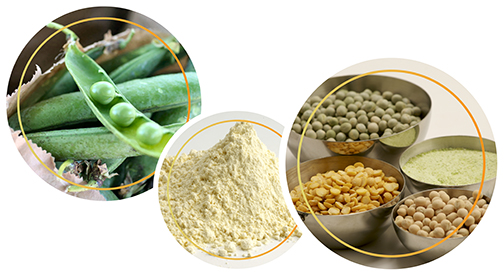 The United Nations has declared 2016 the International Year of Pulses and the Canadian pulse industry is eager to raise awareness about the many uses and health benefits of their crops. Despite being a major producer of pulses, Canada’s consumption is fairly low when compared to other countries. Canada is one of the largest suppliers of imported pulses for India, the world’s largest producer, consumer and importer of the crops. Pulses, especially lentils, are an integral part of the traditional Indian diet, and the country is struggling to keep up with the increasing demands of a rapidly growing population.

At home, Canadian consumers don’t seem to know what to do with pulses, besides throwing them into soups or salads whole. According to an Ipsos Reid report, commissioned by Alberta Agriculture and Rural Development and Pulse Canada in 2010, most Canadians didn’t know what pulses were. They reported that two of the biggest factors preventing them from consuming pulses were not having pulses in mind when they were preparing a meal and not knowing how to cook or prepare them. Only 20 per cent of those surveyed indicated that they ate at least one type of pulse on a weekly basis, and according to the study, the estimated average weekly pulse consumption among this group was 1.3 cups.

“There’s definitely potential to increase domestic consumption,” says Heather Maskus, project manager for the Canadian International Grains Institute’s (CIGI) Pulse Milling and Utilization Project. “From a Canadian perspective, we’re really not taking advantage of a healthy, nutritious crop that is actually grown right here. The majority of what we produce is exported.”

“[Pulses] have been important for farmers to be able to diversify their crop rotations,” says Carl Potts, Executive Director of Saskatchewan Pulse Growers. “They also have some very positive environmental benefits,” he adds. Potts is referring to the fact that pulses, because they are a legume crop, don’t need special nitrogen fertilizer to grow. In fact, they take nitrogen from the air and convert into a form the plant can use, leaving the soil rich in nitrogen for subsequent crops.

Apart from being environmentally friendly, pulses are pretty friendly to the human body as well. They are high in protein and fibre, as well as essential vitamins and minerals like iron, potassium and folate.

“There is a fair bit of evidence that is linking pulse consumption to things like blood sugar control and cardiovascular disease risk [reduction],” Potts says. Further research is still needed in this area before manufacturers can make health claims, he says, but in the meantime, the idea that pulses can be used to boost the health profile of other food products is generating interest among manufacturers.

Pulses are very unique in that they contain plant proteins, although that plant protein is not necessarily complete, says Tanya Der, Food Innovation and Marketing Manager at Pulse Canada. “[Pulses] are very high in protein and they have an amino acid profile that is very complementary to other cereal grains such as wheat, corn, rice, or even oats,” says Der. “The question is, can you get these same health benefits in a processed food product?”

A Sum of Its Parts

When Canadians think of pulses, they often picture them in their whole or split state and being eaten as some sort of soup or stew. Milling pulses into flour and flakes, or breaking them down through fractionation into starch, protein and fibre, allows pulses to be used in other ways, however.  Saskatchewan Pulse Growers invests substantially in research that is changing the traditional perception of pulses and exploring the different ways they can be used as components of other food, Potts says. For example, pulses can be used as starches and thickeners in gluten-free pastas or bread, or as coatings for meat products, where they enhance texture and reduce oil absorption.

“What we as an industry are striving for is to create the capacity to supply pulse flours that are consistently functional, that can be used in specific food applications, whether it is in bread or putting it into a meat product as a binder,” says Der.  “We hope that the end results are ingredients that are functional, that can be used in a series of food applications, and that can improve the nutrition and health profile of the food.”

Aside from their potential to replace wheat for those with gluten allergies, pulses also offer consumers a way to diversify their diets, Maskus says. “One of the biggest benefits we’re seeing here is that pulses help to provide that complementary protein base when used in combination with wheat,” Maskus says. There is also a lot of interest in the way pulses complement other cereal grains when they are combined, she says. Producers of snack foods such as extruded products and chips have likewise embraced pulses as an essential ingredient.

“Here at the Canadian International Grains Institute, we’re trying to understand more about the functionality and utilization [of pulses],” Maskus says. “They can be a really healthy, nutritious part of a diet and are also very tasty and highly versatile.”