Canadians are unequivocally eating less bread. According to Mintel, based on data from Statistics Canada and the Economist Intelligence Unit, per capita consumption of bread has shown a consistent decline in the country over the last decade, falling by a cumulative 18% from 16.5kg in 2007 to just 13.5kg in 2016 – with the average Canadian now eating 3kg less bread annually now than nine years ago. Like the neighbouring U.S. market, this decline can be largely attributed to poor health perceptions of bread, and the emergence of diets that shun carbohydrates and gluten. Mintel’s Bakery Products: Bread – Canada, July 2017 report revealed that while 97% of Canadians claimed to purchase bread over the last three months, 35% said they were trying to limit the amount they eat, with such avoidance higher among demographics that are typically more health conscious: older consumers and women. (See Figure 1) 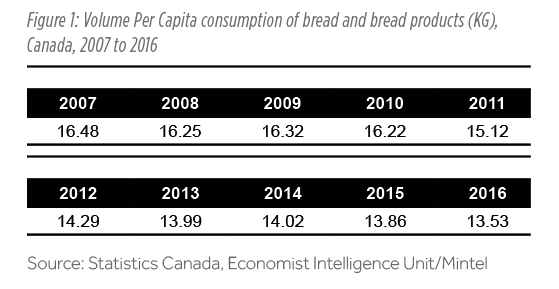 However, while health concerns are clearly an obstacle for the category, their influence should not be overestimated. When asked what factors most influence their bread purchases, category users cite a number of factors ahead of health, with flavour, price, freshness and format all considered significantly more important. This has enabled manufacturers to counteract declines in overall consumption by introducing new flavours and formats, helping prop up the value of the market while volumes have declined. The same Mintel data as above, for example, revealed that volume sales declined by a cumulative 11% between 2010 and 2016, while the value of the market increased by 1.8%. This suggests that the ongoing challenge for bread manufacturers in Canada is not necessarily tied to overcoming health concerns, but identifying what matters to consumers and introducing value-added solutions that cater to these demands.

Wall of beige takes on colour

The biggest change in the Canadian bread market over the last few years has been the move away from the so-called ‘wall of beige’ to a more vibrant category offering a range of formats, tastes and textures. Packaged sliced bread still ranks as the most popular bread type – purchased by 78% of the population in the three months to May 2017 – while other traditional North American concepts like hot dog/ hamburger buns (51%) and rolls (47%) also remain in demand. However, there is undoubtedly growing openness to breads that can be considered ‘less conventional’, with tortillas (36%), flavoured bread (28%), naans (23%), and other internationally inspired breads/buns (17%) now purchased by a good chunk of the population. Importantly, such formats are helping brands sustain consumption among a younger audience. Millennials are significantly less likely to consume sliced bread than older generations in Canada, but are driving uptake of less conventional formats as they look for products that better resonate with their experimental tastes. Indeed, 18 to 34-year-olds over-index in their consumption of bagels, tortilla, flavoured bread, naans, and other internationally inspired breads/ buns, and express significantly more interest in trying “bread/baked goods that are traditional in other countries”. This is helping to maintain overall bread consumption at 95% of 18 to 34-year-olds, and suggests that manufacturers in Canada should maintain a diversified portfolio to ensure relevance across age groups going forward. Such products are also likely to have increasing appeal in a country where immigration, largely from Asia, is expected to drive population growth in the coming years. Statistics Canada forecasts that between 29% and 32% of Canadians will be a member of a visible minority group by 2031, many of whom will prefer the traditional breads of their heritage.

Artisanal breads can encourage older consumers to trade up

Ensuring relevance among younger generations will be a priority for bread manufacturers in Canada going forward, but the ageing population suggests that older consumers must not be forgotten. According to Mintel’s Canadian Lifestyles: Pride and Purse Strings – Canada, April 2017 report, 31% of the country’s population was aged over-55 in 2016, equivalent to 10.8 million consumers. Seniors also account for the fastest-growing age group, and the number is expected to almost double over the next 25 years. This makes them a potentially lucrative demographic across categories, particularly as they are typically more financially stable than younger consumers, leaving room for discretionary spending and a greater willingness to splurge on higher quality products.

Importantly, such behaviour translates to the bread aisle, where the over-55s are less price sensitive and show greater interest in added value concepts. While older consumers are more likely than any other age group to be limiting their bread intake, there are opportunities to counteract declining frequency of consumption by encouraging them to trade up. There is, for example, particular interest in artisanal/craft bread among these consumers, with 27% of the over-55s agreeing that it is worth paying more for artisanal or craft bread, compared to 22% of 18 to 34-year-olds. Developing products with a simple, more natural position, and a hand-crafted image that stands in opposition to the mass-produced majority, could therefore help brands reengage an older audience that is either reducing frequency of bread consumption, or largely stuck on low-cost formats like packaged sliced bread. (See Figure 2) 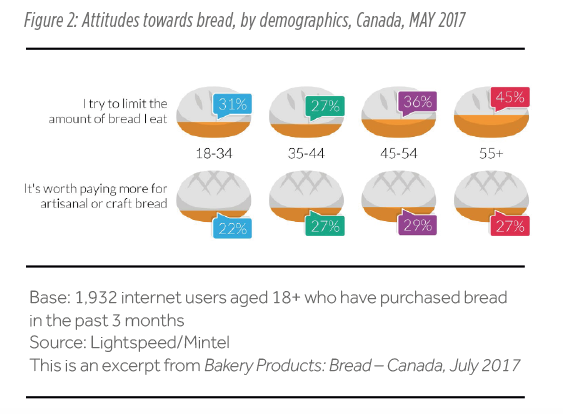 Canadians are eating less bread due to poor health perceptions and the emergence of diets that shun carbohydrates and gluten.

Growing value sales in recent years do, however, highlight that bread is no longer seen as a commodity in Canada, creating opportunities for manufacturers to counteract volume declines through added value options.

Experimental younger consumers can be reached by embracing diversity and the growing number of internationally inspired breads available in the market, while older consumers are likely to be attracted to artisanal/craft breads that offer an alternative to mass-produced options.