Unlocking the potential of Canadian proteins 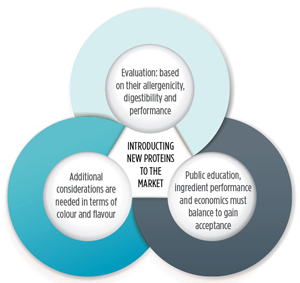 OVERVIEW
Canada’s agriculture sector is well known for supplying world markets with their exports of raw materials from pulses (e.g, peas, lentils, chickpeas and faba beans), oilseed (e.g., canola and flax seed) and wheat. However once beyond our borders little thought is given to the role Canadian products play in food security and nutrition on a global scale. Nor is secondary processing of these commodities and ensuing byproducts into higher value fractions, such as proteins, starches, lipids, soluble/insoluble fibre or for minor bioactive compounds given much consideration from a Canadian processing industry perspective. As research and innovation advances within Canada and partnering countries, the potential for further processing of raw materials into higher valued fractions will open up new markets for Canadian producers, processors and, food and biotech companies. The overall aim of this article is to highlight the potential and significance of proteins for Canada.

Protein ingredients represent a multi-billion dollar industry, presently dominated by proteins, such as gelatin, egg white, casein and whey (from dairy), soy and wheat gluten. In 2015, the global protein market is expected to reach $24.5 billion with the greatest annual growth occurring in the plant protein ingredient sector [1]. Market trends are shifting towards lower cost and abundant plant-based alternatives due to rising costs of dairy-based ingredients; growing dietary preferences (e.g., gluten-free and vegan) and consumer demand for healthier ingredients. Despite experiencing greater market growth, the widespread use of plant proteins has been hindered by their lower solubility (and functionality) relative to animal-based products, and the allergenicity associated with proteins, such as soy and wheat. Strong flavor characteristics of legumes that also negatively impacts consumer perception. Despite this, plant-based proteins are making significant market gains from a nutritional perspective and as ingredients (e.g., flours, concentrates and isolates) in food and bio-based material applications (e.g., edible films, controlled delivery platforms and adhesives). Emerging proteins from the Canadian agriculture sector with potential from both a nutrition and functional standpoint include those from lentils, faba beans, beans (e.g, Great Northern beans, etc), hemp, potato and canola. Protein products from fish and algal sources are also gaining significance. Canada is already a stakeholder in the production of pea, soy and canola protein products, with a huge potential to expand.

NUTRITIONAL POWER HOUSES
Proteins represent an important dietary source of essential amino acids (isoleucine, leucine, lysine, threonine, tryptophan, methionine, histidine, valine and phenylalanine) for human nutrition, as they are critical for our musculature, synthesis of enzymes and cells and metabolic functions. From a dietary standpoint, the quality of a protein is influenced by two major factors: 1) the relative proportions of the essential amino acids in the food in relation to human amino acid/protein requirements; and 2) the extent to which the dietary protein is digested, absorbed and made available to synthesize proteins within the body. In general, animal-based proteins tend to have higher amino acid scores (amino acid content relative to human needs). Plant-based proteins, on the other hand, tend to have a deficiency of one or more amino acids. For instance, pulse proteins (e.g., pea) are limiting in the sulfur-containing amino acids (cysteine and methionine), but tend to have higher levels of lysine. In contrast, cereals tend to be limiting in lysine. As such, blending of pulse and cereal protein sources is commonplace, on a global scale, for the provision of protein to the human diet.

The amino acid profile of the food protein is just one factor. A completely balanced protein is of no use in the human diet if it can’t be digested and absorbed. The digestibility of proteins can be influenced by the presence of anti-nutritive factors in the food that depress digestibility, and by processing steps (i.e, heat, in the presence of reducing sugars) that can reduce metabolic availability. While numerous methods have been developed and implemented for the assessment of protein quality, one internationally accepted method to estimate protein quality is the Protein Digestibility-Corrected Amino Acid Score (PDCAAS) method [2]. With this method, the amino acid composition of the food is determined and related to a reference protein pattern, based on human amino acid requirement estimates. This number is called the amino acid score. Multiplication of the score value by a measure of the total protein digestibility gives the PDCAAS value. Most food proteins, particularly plant-based food proteins, are not completely digestible, so the PDCAAS reflects the best attempt to measure the overall quality of a protein as the product of the digestibility of the protein and the amino acid score. Values approaching 1.0 or greater are considered the highest quality proteins.

The PDCAAS measure is used in the US to establish protein content claims on foods and is the standard international method for measuring protein quality, both for regulatory and food security policies. Recently, a new method called the Digestible Indispensable Amino Acid Score (DIAAS) has been proposed as an improvement to PDCAAS [2], however governments and international agencies will need to assess the impact of moving to this proposed methodology on their overall food policies and regulations. A comparison of PDCAAS and DIAAS values for cooked pulses, for example, did not lead to any significant differences in the final values obtained. Where the differences will lie is in the interpretation: The DIAAS proposal recommends the use of much higher cut-off values for the establishment of protein quality claims on foods. As such, animal-based proteins will be positioned in a much more favourable light relative to plant-based proteins. This could lead to confusing messages for consumers. Pulses, for example, are considered in the “Meat and Alternatives” category under Canada’s Food Guide, but they would not be permitted to carry a “Source of Protein” claim under the proposed DIAAS method, despite the fact that many carry this claim under the current Canadian and US regulatory framework. However, further consultation and guidance on this issue by all stakeholders is recommended [2] prior to adoption of the DIAAS methodology.

FUNCTIONAL ROLE AS INGREDIENTS
The functionality of protein ingredients refers to any property other than their nutritional composition that influences their utilization. For instance, their solubility or abilities to hold water or lipid, foam, gel, thicken and emulsify within a product. Predicting the functional behaviour in foods can be complex because of the lack of standardized testing methodologies (with few exceptions), interactions with other ingredients, and due to wide differences in proteins themselves. In a simple system, the functional behaviour of proteins is strongly related to the environment (e.g., presence of salts or sugars, and temperature) and properties of the protein themselves, such as size, shape, surface characteristics, folding and level of denaturation. Processing or extraction of the protein can further complicate their performance. For instance, different processes may select for different types of proteins within the end product (e.g., isolate), cause heat-induced damage to the protein, or influence the level of non-protein constituents; all which can have a positive or negative impact on their functionality. Milk and egg proteins are widely used in foods because of their overall excellent functional properties stemming from their high solubility. In contrast, the incorporation of plant proteins remains challenging due to difficulties surrounding solubility and strong flavour profiles. And further, as industry tries to balance amino acid profiles for optimal nutritional, protein-protein interactions and competing protein functionality may adversely affect product quality and create formulation challenges.

To address some of these challenges, research has focused on improving processing practices to improve the overall quality of the end product, for instance investigating milling technology for refining flours, air classification to produce protein concentrates, or the use micellular-based extraction [3], alkaline extraction-isoelectric precipitation [4], membrane filtration [5] or enzyme-assisted aqueous extraction [6] to produce new isolate products for the food industry. Enhancement of protein functionality through cross linking [7], partial hydrolysis [8], controlled protein-polysaccharide interactions [9] or temperature-induced conformational changes are also been explored. Secondary processing of the raw materials, has also paved the way for expanded capacity in terms of extrusion technology to produce texturized ingredients and products, such as snack foods, cereals and artificial meat products. Protein ingredients are used in a wide range of applications including bread and bakery, meat-based products, dairy and dairy-free products, beverages, snack foods, ready-to-each meals, pasta, confectionary products, soups and sauces, and health food items based on their functional attributes. Protein concentrate and isolate products are also available as nutritional supplements, and are being used in infant formulas, meal replacement and enteral formulas.

ADVANCES IN PROTEIN-BASED INNOVATIONS
Advances in protein science and technology have also led to the increased utilization of proteins in higher valued applications. For instance, enzymatic hydrolysis of proteins is being used as a means of improving protein solubility and transparency for greater incorporation into beverages, and for the production of bioactive peptides. The latter are being researched for their potential to enhance health and reduce disease risk through diverse functions including antimicrobial, antioxidative, antihypertensive, antidiabetic, cholesterol-lowering, satiety-inducing and immunomodulatory properties [10]. Proteins are also being explored in the development of controlled delivery platforms (e.g., microcapsules and nanoparticles) for carrying sensitive health promoting ingredients, such as omega-3 fatty acid rich oils [11] or probiotics [12], or in the development of biodegradable and/or edible packaging [13] and, adhesives [14]. Furthermore, increasingly plant proteins are being used in speciality feed markets, such as in the development of aquaculture pellets [15]).

BARRIER/CHALLENGES IN INTRODUCING NEW PROTEINS INTO THE MARKETPLACE
Despite Canada’s global role in the agricultural export markets, the lack of secondary processing investment in our raw materials to generate high value fractions restricts the economic potential of the agriculture and agri-food sector within Canada. In order for a new protein ingredient to become accepted by the market, several barriers or hurdles need to be overcome first. For instance, proteins need to be evaluated on based on their allergenicity, digestibility, performance in food products, associated health claims and labelling. And in the case of some proteins, additional considerations are needed in terms of colour and flavour. And finally, public education, ingredient performance and economics must balance to gain acceptance by industry and consumers. Research and innovation in these areas have, or are advancing to support market growth, and market expansion for protein ingredients already in the marketplace.