The 2015 Trends Impacting the Food Industry 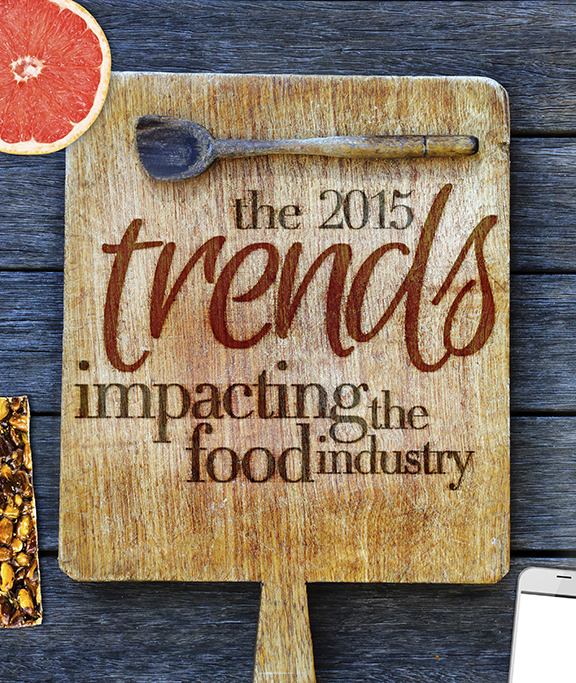 Innova Market Insights recently identified its top 10 trends likely to impact the food industry in 2015 and beyond, identified by the company’s ongoing analysis of key global developments in food and drink launch activity worldwide. In previous years, Innova has consistently predicted upcoming trends, including “Sustainability” in 2008, “Free-From Rises” in 2010, “Return to Softer Claims” in 2011, and “Location, Location, Location” in 2012, all of which have developed further and continue to have a significant effect on the industry today.

This year, the company is predicting the rise of the clear label.

“The move from ‘clean’ to ‘clear’ labelling is a key trend for 2015, reflecting a move to clearer and simpler claims and packaging for maximum transparency,” says Lu Ann Williams, Director of Innovation at Innova Market Insights. “Meeting the needs of the Millennial consumer has also become a key focus, as has targeting the demands of the gourmet consumer at home, re-engineering the snacks market for today’s lifestyles and combating obesity with a focus on positive nutrition.”

Top food and beverage trends for 2015 are:

From Clean to Clear Label
Clean label claims are tracked on nearly a quarter of all food and beverage launches, with manufacturers increasingly highlighting the naturalness and origin of their products. With growing concerns over the lack of a definition of “natural,” however, there is a need for more clarity and specific details. Consumers, retailers, industry and regulators are all driving more transparency in labelling.

Convenience for Foodies
Continued interest in home cooking has been driven by cooking shows on TV and by blogging foodies. It is seen as fashionable, fun and social, as well as healthy and cost-effective. It has driven demand for a greater choice of fresh foods, ingredients for cooking from scratch and a wider use of recipe suggestions by manufacturers and retailers.

Marketing to Millennials
The so-called Millennial generation, generally aged between 15 and 35, now accounts for about one-third of the global population and is tech-savvy and socially engaged. They are well informed, want to try something different and are generally less brand loyal than older consumers. They want to connect with products and brands and know the story behind them.

Snacks Rise to the Occasion
Formal mealtimes are continuing to decline in popularity and growing numbers of foods and drinks are now considered to be snacks. Quick healthy foods are tending to replace traditional meal occasions and more snacks are targeted at specific moments of consumption, with different demand influences at different times of day.

Good Fats, Good Carbs
With concerns over obesity there is a growing emphasis on unsaturated and natural fats and oils that has seen rising interest in Omega-3 fatty acid content as well as the return of butter to favour as a natural, tasty alternative to artificial margarines that may be high in trans fats. In the same way, naturally occurring sugar is being favoured at the expense of added sugars and artificial sweeteners.

MORE IN STORE FOR PROTEIN
Ingredient suppliers, food producers and consumers are on the lookout for the next protein source. Soy protein is regarded as cheap and mainstream and therefore being less applied among NPLs tracked. Whey protein has been popular for some years and is still growing, while pulse protein is rapidly emerging. More algae protein applications are expected in the future. Further along, insect protein may become big in various categories. Damhert Nutrition recently launched the Insecta range to Belgian supermarkets; a line of burgers, schnitzels and nuggets, all created using Dutch-bred buffalo worms. The buffalo worms reared specifically for human consumption are applied as an alternative high protein, meat substitute.

NEW ROUTES FOR FRUIT
More product launches are being tracked with real fruit and vegetables, as they can function as colouring foodstuffs and in that role meet the increased demand for natural colours and flavours. Fruit and vegetable inclusions can add to the “permissible indulgence” character of a product. Consumers perceive a product to be healthier when it contains a real fruit or vegetable ingredient. Recent launches include Food For Health Kids Little Bites Choco Banana (Australia), which is “made with real fruit.”

A FRESH LOOK AT FROZEN
In order to compete with the healthy appeal of fresh aisles and the convenience of canned foods, established frozen foods (vegetables and seafood) are focusing on freshness in their marketing, stressing the superior nutritional content in frozen food. Brand extensions include larger varieties in vegetables and fruits. At the same time, the frozen segment is witnessing new product launch activity in new categories (e.g. soups, fruit, drinks, finger foods, sauces, pastries, herbs). Findus now offers a line of frozen Mediterranean Spices that offer high convenience and fresh qualities.

PRIVATE LABEL POWERS ON
Even though the worst of the economic recession is over, private label is still gaining market share in terms of new product launches in Europe, North America and Australasia. Store brands are here to stay and are found in all product segments. Discounters Aldi and Lidl are by consumers no longer solely seen as budget stores, but are accepted by the general public and considered to have good quality products. Recent innovations from retailers include M&S Summer of Flavour Cream Cheese With Wasabi.

RICH, CHEWY & CRUNCH
Texture is an important driver for taste perception of food and beverages and focus of many of today’s food innovations. Brands are creatively combining textures with for example crispy inclusions, soft centres and extra crunchy toppings. Texture claims are shown more prominently on front-of-pack. Also, brands are creative in describing texture or including a texture claim in a product name. Recent innovations include Quaker Big Chewy Chocolate Chip bars.