Rain on the Plain

Heavy rainfall has seen the second flood in four years on the Prairies, leaving provinces and farmers looking for solutions and consumers on the hook with higher prices. 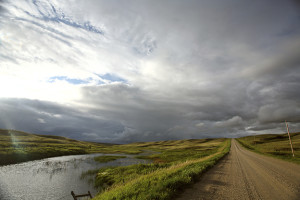 Norm Hall’s family carved their farm out of the bush on the southern shores of the Quill Lakes in Saskatchewan 133 years ago.

He’s been working the land himself for more than three decades, but thanks to a summer of flooding and a decade of excess moisture he has a little bit less land to farm now. “I used to proudly say I was on the south shore but I’m in the south shore now,” he says. “We’ve lost a number of acres this year. This year, those lakes have risen over 36 inches and over the last 10 years they’ve risen close to 22 feet. It just keeps expanding.”

As President of the Agricultural Producers Association of Saskatchewan, Hall is well aware of the plight of many farmers in the Prairies. More than 100 communities in Saskatchewan and Manitoba were forced to declare states of emergency, and more than 1,000 people in both provinces had to leave their homes thanks to flooding this summer. The floods spared large metropolises but agriculture was hit hard. Manitoba’s preliminary assessments estimate the damage at $200 million, while other assessments peg the damage at $1 billion. Approximately 600,000 seeded acres were destroyed and an additional 985,000 unseeded acres were ruined. Manitoba has already paid out $63 million in crop insurance claims. Saskatchewan doesn’t have numbers available yet.

The scope of the disaster prompted Manitoba Premier Greg Selinger to declare a province-wide state of emergency. Troops and volunteers were deployed to fill hundreds of thousands of sandbags to shore up flood defenses.

A one-off situation would be bad enough, but the summer floods come on the heels of the devastating flood of 2011, which caused about $1.3 billion in damages, making it the second-costliest weather event in Canadian history following the 1998 ice storm which toppled trees and caused major outages throughout Eastern Canada. “It’s not as bad as it was in 2011 but anytime a farmer loses production of crop and hay it’s a challenge because they have to find alternative sources and when you have to find alternative sources there’s an expense that goes along with that,” says Ron Kostyshyn, Minister of Agriculture in Manitoba.

The flood emergency this summer was different than in 2011. Rather than a spring melt, the trigger was several days of torrential rain as a slow-moving system all but parked itself over the region, drenching it in more than 200 mm of rain. “I often say this tongue in cheek; Manitoba is kind of a bathtub of a water shed that starts in the Dakotas,” says Kostyshyn. “The bathtub is filling up and the outlets are somewhat flowing at maximum.”

Eastern Saskatchewan and Western Manitoba were hardest hit by excess moisture over the last few years. “There are areas in the western half of [Saskatchewan] that have a fair bit of water but for them that’s a novelty and I use that word lightly,” says Hall. “It’s just something they’re not used to. They’re not at all amused. The east half of the province… just keeps getting worse and worse.”

“In certain areas of the [Manitoba] it would be safe to say there have been three or four years of challenges of excess moisture that’s made it very difficult for livestock and grain production,” adds Kostyshyn.

While it’s still too early to gauge the final damage, the flood has impacted the entire agri-food system in the provinces. Farmer’s markets have felt the repercussions as have hay and forage production. The beef industry is paying the price with increased transportation costs and crops that would have been used as feed for turkey and pork feed have been lost. “It’s kind of a domino effect,” says Kostyshyn. “Without a doubt it will [affect the food supply]. Shortage will create more cost and everything else will increase the cost to the consumer when we talk about food.”

WET CYCLE
As little as 15 years ago, the Prairies were in the midst of serious long-term droughts. Dave Sauchyn, a professor at the University of Regina, has collected 8,000 wood and tree core samples to get a sense of weather patterns in the Prairies over the last millennium. The data suggests the Prairies typically see wet and dry cycles lasting decades. These cycles tend to coincide with short- and long-term trends in currents and temperatures in the Pacific Ocean. “Dave Sauchyn said it’s a good possibility we’re in the middle of a 20 to 25-year wet cycle,” says Hall. “So a lot of us that are planning on farming for the next 10 or 15 years, yeah we’re going to have to get used to it.”

If the excess moisture continues, it could render modern farming methods and tools useless. “A lot of Western Canadian agriculture has been based on us being a semi-arid climate,” says Hall. “Now we may have to go back to the old tillage methods to try and dry the land out.”

Both provinces are working on ways to mitigate the impact and damage floods cause. “Our government is being very proactive to develop a system that we need, to develop a secondary outlet at the bottom of this bathtub,” says Kostyshyn. “We’re in the process of obtaining some alternative choices of movement of water out of Lake Manitoba into Lake Winnipeg so it minimizes the reverse domino effect of overland flooding.” Manitoba is in talks with the federal government about implementing a control structure. “With their blessing we can look at a control structure and have a relief valve, if I may use that terminology, for minimizing continuing flooding that we experienced in 2011 and 2014.”

Their neighbours already have a few structures in place like the Diefenbaker Dam in the Saskatchewan River, which is a power generator but also a flood mitigator, as well as the Rafferty and Alameda Dams in the Souris River. There’s nothing in place on the Qu’Appelle or Assiniboine Rivers, though. “We’ve talked about the long-range plans of flood mitigation by putting controlled structures in these larger river systems,” says Hall. 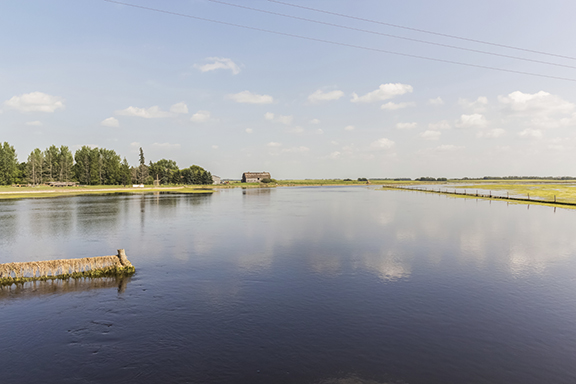 COMPLEX ISSUE
Exacerbating the problem is farmers are draining the land. With the prairies being so flat, water tends to sit on the land for three or four days before eventually disappearing, but by that time, crops have been ruined. It’s led to farmers draining their land which has sent the water downstream where it either ends up in water basins like the Quill Lakes or it ends up going through Manitoba’s lakes and river systems before eventually ending up in Hudson Bay. “We’ve talked to the province at least in Saskatchewan, about as this water sits on producer’s land it’s costing those producers money and if they drain the water they’re sending that water downstream and costing someone else money,” says Hall. “Now if we’re to keep it on our land, that land is ours, it’s deeded, it’s considered above high water, do we get paid for that? And is there a social benefit to keep this water on our land as opposed to sending it downstream?” The provinces are also working together to devise a solution. “In Manitoba and Saskatchewan, water agencies are working on either drainage plans or in Manitoba’s case, they’re putting a moratorium on any more drainage,” says Hall.

Saskatchewan is also in the midst of bringing forward a 25-year water plan. “I think there’s another three or four years of water programs,” says Hall. In the meantime, Hall is a part of the Assiniboine River Basin planning commission. “Right now it’s just a planning group to try and get enough people and resources together to make this thing fly,” says Hall. “That would be to aid the smaller watershed authorities that are within Saskatchewan and Manitoba.”

RELYING ON MOTHER NATURE
The worry after two devastating floods in a short amount of time is this might be becoming the norm. “If we get a drier season next year for the most part we’ll be able to handle it all, but if we get a normal or above normal rainfall next year it’s going to continue in the same cycle,” says Hall. “We’ve been above average rainfall for the last seven or eight years and the water levels just aren’t going down in our part of the province and in Western Manitoba.”

Kostyshyn won’t predict what next year will bring.

“Being a farmer and rancher for 35 years of my life, regardless of whether you go back 50 or 60 years, Mother Nature has always been a challenge that you can never predict.”