The Impact of Salt Reduction in Baked Goods

Dietary intake of sodium chloride (NaCl, commonly known as salt) has increased considerably over the last few decades due to changes in the human diet. The main source of NaCl in our diet is processed foods, accounting for ~70-75% of the total intake, with cereal and cereal products contributing 30-35% of overall intake.1,2 It has been widely reported that high daily NaCl intake results in hypertension as well as numerous cardio-vascular diseases and other health problems.3,4 This results in a serious strain on health systems which can have a negative impact on society. Cardiovascular disease (apoplexy, heart attack, heart failure) as a result of hypertension is thought to be the most common cause of death in industrial countries.5 Because cereal foods comprise a significant amount of our diet, yeast-leavened products are a major source of dietary sodium; therefore there is significant consumer and government demand on the baking industry to explore ways to reduce sodium in its products. The importance of such reduction has been highlighted by legislations introduced by the European Union6, Canada7, and the United States8. The World Health Organization (WHO)9 has set a target of a 30% relative reduction in population NaCl intake for all member countries of the United Nations by 2025. Baked goods, and in particular bread, are considered as a key target in salt-reduction strategies.10 As part of Health Canada’s Sodium Working Group strategy, targeted sodium levels in pan bread should reach ~330 mg/100g by 2016. For the strategy to be successful, partnerships between the responsible organizations from industry, various government agencies, and research institutions would be required.

Concerning cereal proteins, the unique capability of wheat gluten to build up a network structure is well known. Gluten proteins have been divided into roughly equal fractions according to their solubility in alcohol-water solutions of gluten (e.g. 60% ethanol): the soluble gliadins and the insoluble glutenins. The appearance of wheat dough viscoelastic properties is largely attributable to the functionality of gluten molecules. It is widely accepted that glutenin contributes mainly to gluten’s elastic properties while gliadin contributes primarily to its flow properties. Wheat dough is generally regarded as a complex material composed of a hydrated protein network in which starch granules and insoluble flour particles are dispersed. Cysteine belongs to the minor amino acids of gluten proteins (~2%), but it is extremely important for the structure and functionality of gluten.11 Most cysteines are present in an oxidized state and form either intrachain disulphide bonds within a protein or interchain disulphide bonds between proteins. These bonds are the main target for most redox reactions that occur during dough preparation and baking.12 Additional covalent bonds formed are tyrosine-tyrosine crosslinks between gluten proteins13 and tyrosine-dehydroferulic acid crosslinks between gluten proteins and arabinoxylans.14 The incorporation of NaCl increases the ordering of the water structure, and also aids in the exposure of apolar groups on protein to the solvent, and thus allows proteins to interact with each other through hydrophobic interactions.15,16 The hydrophobic interactions between gluten proteins play an important role in stabilizing gluten.17 Reduction of NaCl causes a weakening of the dough and an increase in water mobility within the dough matrix, resulting in sticky dough.

Stickiness is a surface-related property related to both adhesive and cohesive forces. Dough with a weaker gluten network tends to have high and low adhesive and cohesive forces, respectively, leading to the stickiness phenomenon.18,19 In contrast, dough with a well-developed gluten network displays low and high adhesive and cohesive forces, respectively, enabling it to be processed well. Dough stickiness is the major limiting factor of NaCl reduction as it relates to the baking industry. In manufacturing, stickiness can lead to low product yield, operational issues, equipment wear and fire hazards.18,20 Whilst dough can often be well-handled and successfully baked on a small scale, production of low-salt baked goods on a big industrialized scale requires precise description of the rheological changes in dough to secure good machinability and proper handling.

Impact on quality characteristics of the final product

A wide variety of baked goods can be found on the supermarket shelves, such as breads, unsweetened rolls and buns, dessert pies, pizza, crackers, cookies, and others. Based on the method of leavening, baked goods can be classified as biologically (yeast) leavened, chemically leavened or unleavened. NaCl as an ingredient in dough formulations has a significant impact on the final quality of yeast leavened products, in particular bread. In bread making, the fermentation is the second important stage, after dough mixing. Dough passes through several stages of fermentation. The role of NaCl in controlling the fermentation is not only due to the increase in osmotic pressure, but also to specific actions of sodium and chloride on the semipermeable membranes of the yeast cells.21 A reduction in NaCl level causes an increased yeast activity and higher CO2 production. As the gluten network becomes weaker at reduced level of NaCl, dough has trouble entrapping the higher amounts of CO2, which negatively affects the bubble distribution within the crumb and leads to a greater level of collapse and defects in the final product.2

The baking process is the final stage, where the relatively high temperatures result in a profound change in taste, flavour, and texture in the dough. During baking a number of physical changes occur, including the rapid expansion of CO2 and water vapor as well as starch gelatinization and protein denaturation.22 These phenomena play a key role in the formation of the two sections of bread, the crust and crumb. Crumb formation involves the change of the gas fraction in dough, which is a disperse phase like foam, into a sponge structure where the gas cells are interconnected. At the beginning of baking the temperature rises up to about 100°C and is maintained there as long as the outer layer contains free moisture. The moisture evaporates or diffuses to the enterior.22 As soon as the temperature rises above 110°C processes such as nonenzymatic browning (known as Maillard reaction) begin. The reduction of NaCl influences the crust flavour and colour due to the impact on yeast activity. Increasing yeast activity leads to a reduction in the amount of free reducing sugars remaining for these processes. The melanoidins formed by the Maillard reaction contribute essentially to the flavour composition of baked goods. Moreover, clinical biochemical studies have recently shown that these browning products partly exhibit antimutagenic and anticarcinogenic properties.23 Most of the odorants which produce the aroma profile originate from the crust. The light crust of NaCl reduced bread is caused by a lack of melanoidins. The contribution of crust to the whole flavour composition of bread is reduced and the bread tastes insipid and stale.24 A descriptive sensory evaluation showed that bread without NaCl lies in the area of sensorial space described by ‘‘sour/acidic”, ‘‘sourdough” and ‘‘yeasty” flavour attributes2, thus making it unappealing to consumers. 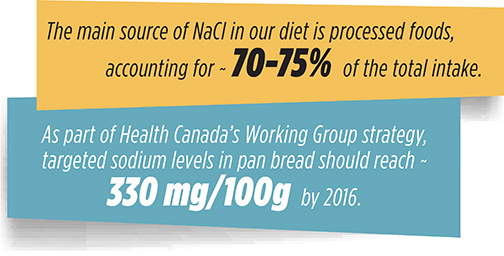 Strategies for limiting the impact of NaCl reduction

A number of strategies have been employed in the literature to help circumvent technological issues associated with dough handling and bread quality at reduced NaCl levels. For instance, enzymes (glucose oxidase, xylanase and alpha-amylase) or enzyme mixtures have been used to target proteins, starches, and/or pentosans in order to alter the dough’s viscoelastic properties and improve handling of sticky dough.28,29,30 Biopreservatives (e.g., lactic acid bacteria which produce organic acids such as lactic, acetic and propionic acids after fermentation) or chemical preservatives (potassium sorbate/ethanol, calcium propionate/ethanol or acetates) have been used as a means to improve shelf life through pH reduction, as an alternative preservative to NaCl.25,31 Furthermore, improved packaging, such as modified atmosphere packing, active packaging, or packaging with new and improved polymeric materials can be used to extend the shelf life of bread products which have reduced levels of NaCl.25,32 Taste contrast has also been used as a sensory technique to alter saltiness by creating a heterogeneous distribution of NaCl within the bread product, to give the same salt perception but with an overall reduced salt level.33 However, probably the most work associated with salt reduction are focused on the use of alternatives to NaCl, such as potassium, calcium and magnesium chloride in order to maintain dough/bread quality. Potassium chloride has been found to act best to partially replace 25-50% of the NaCl concentration to give good dough handling, however metallic or bitter flavors arise with 10-20% NaCl replacement rendering the product unacceptable to consumers and the strategy ineffective at reaching Health Canada targets.34,35

Although numerous strategies have been developed to combat the effects of NaCl reduction in bread, no one approach has shown sufficient promise to meet Health Canada’s targets put forth by the Sodium Working Group. As such significant research efforts in this area through collaborative university-industry partnerships is warranted in order to improve the health and wellbeing of Canadians and to ensure the Canadian bakery industry remains competitive in the global marketplace.