Chocolate is a centuries-old product turned multibillion dollar industry that is constantly evolving as processing conditions continue to improve and consumers’ needs change. As we presently reside in the age of food science, our understanding of the molecular behaviour of chocolate has not only enhanced both production and quality, but has also brought many questions to light regarding the relationship between composition, processing, and functional properties.

Chocolate is a complex system, both for its flavour chemistry and colloidal properties. Essential to its final quality is a glossy finish, clean snap when broken, and a sharp melting profile at oral temperature as the chocolate melts to a smooth, velvety liquid1. Fat crystal size not only impacts how the chocolate melts but also how its flavour is perceived as aromatic volatiles are released and sensed retronasally. The increased public awareness of caloric intake of confections has ushered in a new wave of product development that creates products with improved nutritional attributes and sustainability while retaining its desirable sensorial experience. Those nutritionally inclined already view dark chocolate as an appreciable source for antioxidants such as proanthocyanidins.2,3 Here, we review the status of cocoa butter alternatives for confectionery application, the physical properties of fat-reduced chocolate, and new efforts in flavour development. 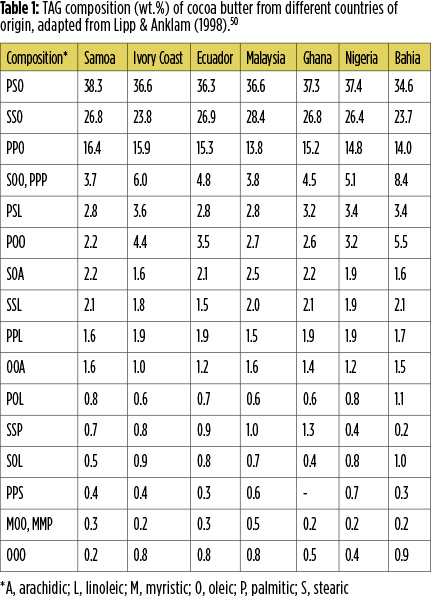 While cocoa butter is the main determinant for texture, appearance, and melting behaviour of chocolate, it is also its most expensive ingredient. The unique and highly desirable properties of cocoa butter result from its simple triacylglycerol (TAG) composition, with 1-palmitoyl-2-oleoyl-3-stearoyl-glycerol (POS), 1,3-dipalmitoyl-2-oleoyl-glycerol (POP), and 1,3-distearoyl-2-oleoyl-glycerol (SOS) being the most abundant at ~85 wt.% collectively.4 Geographic and environmental factors including rainfall, temperature, and amount of sunshine can significantly impact TAG composition, resulting in functional differences between cocoa butters (Table 1).5,6 The cacao tree from which cocoa is produced is also susceptible to disease, which can lead to devastating results. For example, Brazil once led cacao production but suffered a massive loss during the 1990s when plantations were infected with witch’s broom disease.7 To avoid inflated prices from poor harvests and the unfortunate practice of adulteration with bulking agents (e.g., dextrin or galantine8), researchers have explored appropriate cocoa butter alternatives to sustain the chocolate industry.

One type of cocoa butter alternative is called a cocoa butter equivalent (CBE), which includes the oil from palm, sal, shea, kokum gurgi, illipé, and mango kernel. These equivalents may be combined directly with cocoa butter to generate compatible mixtures that possess similar composition and physical properties as pure cocoa butter.9,10 Fat bloom, appearing as larger cocoa butter crystals or regions of welled liquid fat under atomic force microscopy, may be inhibited with the incorporation of Coberine, a commercial CBE, to admixtures of chocolate with milk fat up to one year11 (Figure 1), providing a possible solution to the shortcomings of cacao butter production.12 European manufacturers may substitute up to 5 wt.% cocoa butter with CBEs according to the European Parliament and Council Directive 2000/36/EC.13,14 In North America, chocolate containing any fat other than cocoa butter is sold as ‘compound chocolate’.15 Palm oil is particularly attractive as a CBE because it is higher yielding than any other oil crop16 and has been shown to have a positive impact on low-density lipoprotein content in blood.17,18 However its tendency to crystallize slowly (Figure 2), which is a result of its comparatively high diacylglycerol content, has complicated its use for further applications. In response to public and industrial demand, palm oil is increasingly being produced sustainably and ethically following higher environmental and socio-economic standards and practices.

CBEs are not to be confused with cocoa butter replacers (CBRs) which crystallize exclusively into the desired β polymorph for confectionery applications, omitting the need to temper.19,20 To achieve the correct polymorph, nearly all cocoa butter would need to be replaced with CBR, far outside the specifications that the Directive has set. For example, both hydrogenated and fractionated palm kernel oils are recognized as suitable replacers if most cocoa butter content is removed. The insufficient removal of cocoa butter may produce a eutectic mixture with the CBR that is lower in solid fat content. Liquid fat migration is also enhanced, generating a softer chocolate product that is at risk of fat bloom.21 CBRs include lauric oils, such as palm kernel oil and coconut oil, hydrogenated non-lauric oils, such as soy, canola, cottonseed, peanut, and corn oil22, milk fat fractions23, and the low-calorie synthetic fat substitute caprenin.24 Owing to growing cost concerns, manufacturers are increasingly turning to CBEs and CBRs, though challenges with regulatory, consumer acceptability and matching the functionality of cocoa butter will need to be fully addressed prior to seeing more widespread use in the years to come.

Designing fat-reduced chocolate products
Many diets are based on regulating saturated fat intake in order to control cholesterol levels in blood.25 Although confections such as chocolate are generally high in fat, many consumers have been able to look past this as confections are often consumed during times of success and reward.26 There is also limited evidence that dark chocolate may favourably affect cardiovascular disease risk status. A new generation of consumers more concerned with links between diet and health has since arrived and is seeking fat-reduced options – even with confections – which has unleashed many technical issues for product developers.27

The summation of solid fat content, fat crystal shape and size, as well as development of a fat crystal network determine the rheology of many fat-based products.28 For chocolate, rheology is affected not only by proper tempering but also balancing the proportion and properties of its ingredients.24,29–31 Cocoa butter is considered by many as the most important ingredient in chocolate, having a significant impact on texture. Its correct firmness, consistency, and cohesiveness are extremely important during the consumption of chocolate as they are markers of perceived quality.32,33 Chocolate is a non-Newtonian pseudoplastic in its molten state34, possessing both yield stress and plastic viscosity. Yield stress is defined as the amount of energy needed to fluidize the system whereas plastic viscosity is the amount of energy that maintains this fluidity.35

Chocolate is typically composed of 30-40 wt.% cocoa butter.27 It has been shown that a higher fat content in chocolate produces a smoother texture36 while fat-reduced chocolates are harder and more difficult to swallow.37,38 Rheologically, it has been previously shown that more than 32 wt.% cocoa butter results in little change to the viscosity of molten chocolate. As cocoa butter content is reduced to 28-32 wt.%, however, viscosity significantly increases. This has been explained by fewer fat molecules assisting in the ‘wetting’ and flowability of dispersed particles in molten chocolate (i.e., cocoa mass, sugar).24 The effect of this fat reduction may further compromise the efficiency of industrial processes such as pumping, moulding, or enrobing.27

Taking note from the molecular gastronomy arena, water ganaches, which are delicate oil-in-water emulsions where cocoa butter and solids are dispersed throughout water with solubilized sugars, have found recent application in chocolate confections. Unlike traditional cream-based ganaches, no additional fat is introduced aside from what is inherent to chocolate and confectioners have become creative by substituting water with fruit purée, beer, or wine for added depth to flavour.39 Emulsions as a solution for fat-reduced chocolates have been further examined by Sullo et al. (2014) who created water-in-cocoa butter systems (Figure 3) processed akin to margarines. An advantage to these systems is their stability as water is kept separate from sugar via Pickering-stabilized droplets approximately one micron in diameter. Use of surfactants such as soy lecithin or polyglycerol polyricinoleate (PGPR) can alter the size of the droplets and their ability to coalesce, which may potentially give confectioners control over the physical properties to suit their needs.40 Though novel, consumer desire for clean label declarations may limit the use of synthetic emulsifiers (i.e., PGPR) for such applications.

Limonene has also been reported to improve the rheological properties of fat-reduced chocolate although this mechanism is not quite clear. The use of this terpene in molten chocolate was previously explored and it was found that viscosity was significantly reduced.27 Other attempts to improve the rheology of fat-reduced chocolates have included optimizing particle size distribution41,42, the use of CBRs37, ethylcellulose oleogels43, and increasing surfactant content.44

New flavours trends for chocolate
While an appeal of purchasing artisanal chocolates may be the usage of single origin cacao beans such as the Trinitario, Criollo, or Nacional type that each impart notes spanning the entire flavour wheel, mass-produced confections often use bean varieties that are either more economical or efficient with notes not quite as multidimensional. That said, industry has cards up its sleeves through its extensive marketing research and innovative product developers, which results in exciting – and sometimes questionable – flavour combinations with chocolate.

The combination of fruit with chocolate is still of much interest, however the aforementioned health-conscious consumers are seeking confections produced with real fruit pieces, according to the T for Trends webinar series given by Cargill Cocoa & Chocolate.45 Chocolate blended with nuts is another popular flavour for consumers. In a recent survey by the Almond Board of California, 77% of consumer responses claimed the addition of nuts to chocolate made it more satisfying.46 Finally, it seems that while salted caramel is still currently popular with consumers, a possible new trend is the combination of chocolate with smoked flavours, such as smoked sugar. This, in addition to chocolate with spice, was confirmed by the Marketing and Consumer Insights team of David Michael & Company during a Q&A segment at the 2015 PMCA Production Conference.47 In parallel to these flavour trends, consumers are seeking transparency in the labelling of their confections, such as better listing of possible allergens or genetically modified organisms (GMOs)48, and if the product is fair-trade certified.49

Summary
Manufacturers and product developers continually push the boundaries of confectionery products with innovative approaches or ingredients perceived as healthy or more acceptable by the consumer. The exploration of cocoa butter alternatives by both academia and industry to better understand how their physical properties compare to cocoa butter has yielded many new sources to sustain chocolate production. Furthermore, with a growing population of health-conscious consumers, developers are coming up with fat-reduced confectionery options while continuing to stay on top of the latest flavour trends. Over the next few years, we expect to see an increased use of these novel products as tools for health promotion, as chocolate undergoes another exciting evolution.

[38]
Spearing, N. (2007). The Effect of Fat on the Texture of Milk Chocolate. Doctoral Dissertation:University of Nottingham.