McCain Foods Canada found this out the hard way when the company’s It’s all good campaign tried to tackle its Deep’n Delicious Cakes. The campaign was launched three years ago with the goal of reformulating its recipes to include products made with only real ingredients that people would use at home.

Heather Crees, McCain’s VP of Marketing, had thought the company’s Smiles potato products were a headache, taking 70 tries to get the recipe right. But the desserts, took the cake. “Our desserts have been over 100 tries,” she says. “It’s taken us a few years to actually get it right.”

About four years ago, the company found in focus groups and in a survey that consumers wanted their food to be made solely from natural, non-chemical ingredients, with clear, easy-to-understand labels. “Consumers are more aware of what goes in their food and there is more of a desire to understand what’s in the food we’re eating and feeding our children,” says Crees. “So that’s everything from what goes into the products to how it’s actually portrayed on a pack.” 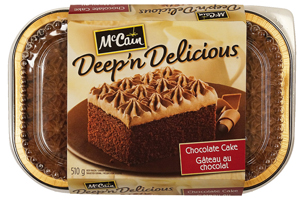 It’s taken three years, but the desserts business has finally been conquered with the reformulated recipes finalized in February and March, and the products on shelves now. “Our biggest challenge was removing some of the unpronounceable ingredients,” says Crees. “For example, in order to remove propylene glycol mono fatty acid esters, we had to find a whole new way of making our cakes. It was technically very challenging but we stuck with it and found a way.”

The cakes are one of the last of McCain’s product line to be reformulated, with more than 70 different products already on the shelf using only real ingredients. “Canada is looking for prepared foods that are made with real ingredients that they recognize,” says Crees. “And so that got us on this journey that we call It’s all good, which is… How can we help them? How can we deliver what Canadians are looking for?”

ASK AND YOU SHALL RECEIVE
It all started with a simple question: What’s in dinner? The question the McCain group had been used to answering – What’s for dinner? – had been replaced. With that in mind, the 55-year-old Florenceville, N.B.-based company commissioned TNS Canadian Facts to poll Canadians to find out what consumers were looking for. 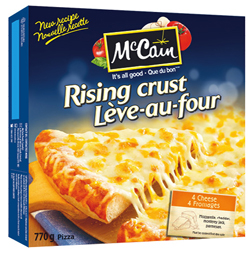 The results forced them into action. The survey found 80 per cent of the 1,294 polled were “avoiding foods that have excessive ingredients that look more like chemical names than real food.” Nevertheless, 71 per cent of respondents “regularly purchase frozen convenience foods with 20 per cent claiming to purchase at least once a week or more.” Also, the survey found 85 per cent “look for prepared foods that are made with ‘real’ ingredients that they recognize.”

Because of this, the It’s all good campaign was born. “The idea that we had was that our food should be made from food and what that meant was no really overly complex processes; simple, wholesome ingredients that consumers would use if they were making it themselves in their own kitchen,” says Crees. “And that also meant the ingredients would be recognizable, real, few in number and pronounceable.”

The company looked at every recipe and asked, “What would we want to change? What would we be wanting to be feeding our kids? And how do you literally start to make the changes that will make the products more what consumers are asking for?” says Crees.

The company developed a three-part model for its reformulated products: the taste had to be as good or better than the current product; it needed to be made with real ingredients, as if it were made from scratch; and wherever possible, deliver an improved nutritional profile. “It was a lot of effort to change but I think at the end of the day we all knew it was the right thing to do because it was what consumers were asking for and when you can do something that gives consumers what they want and then get feedback from them that they really like it, then that’s great,” says Crees. 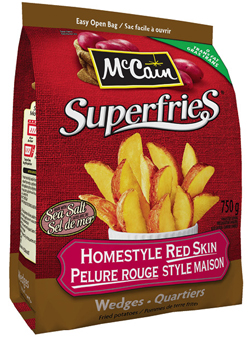 SIMPLY DIFFICULT
In the beginning it was not an easy sell, even within the company. There were worries about cost. One of McCain’s flagship products, Superfries, were a prime example, with one of the goals being to reduce the sodium in the product. “The initial reaction was, ‘Well, we’re not sure it can be done,’” says Crees. But McCain’s research and development went away, thought about it and came up with a possible solution: sea salt. The first reaction that it was going to cost the company more money to manufacture but because sea salt has a more concentrated taste they didn’t have to use as much of it. “What ended up happening was that we were able to move to a better ingredient, it delivered the same great taste, but we were able to use less of it. In the end you deliver a better product for consumers and it costs about the same amount,” Crees says. 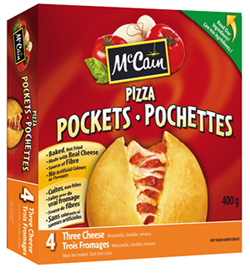 The company ran into similar issues with its Pizza Pockets. “We used to have a few unpronounceable ingredients,” says Crees. The solution was the addition of flax seed. “It still delivered the same great-tasting results but now consumers also got a fibre benefit in the product as well.” Sodium was reduced 15 to 20 per cent.

Crees says the results have been “phenomenal.” “We don’t actually share business results but it’s really made a huge difference both in terms of our business results and also the way consumers perceive McCain.” Net dollar sales for McCain Superfries increased 11 per cent in 2010 and 15 per cent in 2011, while McCain Frozen Pizza Meals were up 4.1 per cent in 2010 and 9.4 per cent in 2011, each significantly outgrowing their categories every year. Millward Brown tracking showed a significant increase in awareness of the McCain It’s all good brand promise: up 31 per cent among pizza consumers and 39 per cent among potato consumers. The campaign is also proving to have an impact on what consumers base their purchasing decisions on, according to a 2011 Vision Critical: McCain “It’s all good post-campaign study. When exposed to the campaign message, 87 per cent of consumers feel that the It’s all good initiative is relevant. Also, the company’s ad campaign makes consumers more likely to purchase McCain products (77 per cent for frozen pizza and 75 per cent for frozen potato), due to the change to new ingredients.

Aside from the push for natural ingredients, McCain also focussed on making the ingredients label easy to understand. “As we were talking to consumers what they kept telling us was that if I look at long ingredient list on the back of the package it’s meaningless to me,” says Crees. “I scan it quickly to see what’s in there but it would be much more helpful if it was organized in a way that was much more understandable.” To remedy this, McCain, using pizza as an example, decided to split the ingredients and organize them in the crust, in the sauce, in the toppings. “That really helped the understanding of consumers as to what was exactly in the product,” says Crees. “We’re making it easier for consumers to understand what’s in their products and to shop the category.”

For Bill Jeffrey, National Coordinator for the Centre for Science in the Public Interest (CSPI), a lot of the public are taking the importance of labels for granted. “I think people underestimate the extent to which they can be extremely effective vehicles for educating consumers,” he says. “Canadians buy probably 20 billion foods a year that have a label on it. That’s really an enormous amount of real estate.”

In Canada, companies are required to list the calories and the amount of 13 nutrients in a chart on the back of packaging. There are two key acts governing the labelling of food and beverages in Canada: The Food and Drugs Act and Consumer Packaging and Labelling Act. These acts enforce a number of key items, including providing for mandatory label information with which consumers can make informed choices. It also requires the use of metric units of measurement and bilingual labelling.
“Food companies guard [labels] jealously and I think they realize more than consumers do that effective food labels can really influence product choice,” says Jeffery.

Despite McCain’s efforts, not all labels are as easy to understand and that needs to change according to Jeffery. “The challenge with labels the way they are now is that they’re pretty complicated and many consumers don’t understand them and probably lots of them think they understand them but they don’t really.”

In a bid to help consumer understanding of labels, Food & Consumer Products of Canada (FCPC) has engaged the federal government to promote the %Daily Value column on the Nutrition Facts table. “The government-regulated Nutrition Facts table is a powerful tool to help Canadians become more informed about what they choose to eat and better empowered to make healthier choices,” says Adam Grachnik of the FCPC.

And thanks to McCain’s It’s all good campaign, Crees is starting to see the trend of simplified ingredients and labels continuing.

“I absolutely think we were [trailblazers],” says Crees. “I’m happy to see it. When we started this journey, our hope was that other companies would follow. We went into it saying if we do our job really well there’ll be a bunch more people that are making changes like that and we’ve seen that in the marketplace now.”