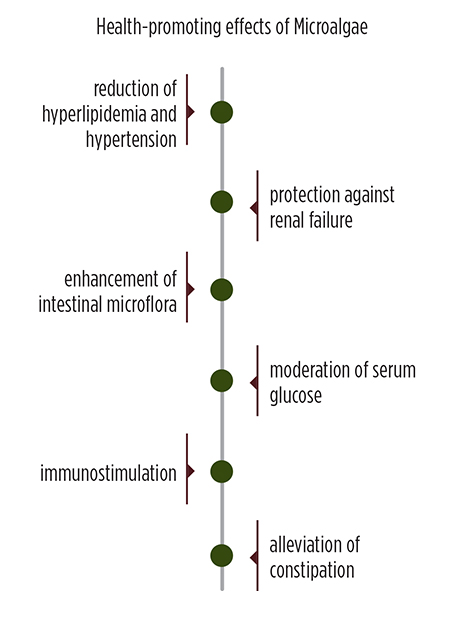 Although relatively unknown, the Canadian microalgae industry is blooming. Microalgae are simple unicellular (photosynthetic) organisms with exceptional growth potential, capable of doubling their biomass within a 24 h period. They can be cultivated in ponds and tanks using water that is unsuitable for human consumption and only need a few key nutrients. Like their growth, their market potential is expanding greatly, as they represent an attractive alternative source of renewable biomass for fuel production. Much of the success and potential of microalgae comes from its ability to produce large amounts of high quality oil, which in some cases can reach up to 75 per cent1. To date, microalgae oil has been primarily explored for use in biofuels, since unlike those prepared from agricultural crops, the use of microalgae feedstock does not raise the food vs fuel debate or cause an increase in food prices2. However, there is now increased demand for whole microalgae, oil or other nutrients (e.g., proteins, vitamins and pigments) for human and animal consumption3,4. Consumption of microalgae and/or microalgae products are currently being investigated for a variety of health-promoting effects including reduction of hyperlipidemia and hypertension; protection against renal failure; enhancement of intestinal microflora; moderation of serum glucose; immunostimulation; and alleviation of constipation4.

PRODUCTION OF MICROALGAE
The majority of microalgae are photoautotrophic and are grown or produced in raceway ponds and photo-bioreactors. In a typical pond system microalgae is grown in uncovered shallow water that is circulated to prevent sedimentation whereas photo-bioreactors are enclosed artificial environments where microalgae is grown in transparent tubes that are fed from a input reservoir and circulated with a pump2. Photo-bioreactors are advantageous in that conditions such as temperature, light, and gas are strictly controlled and a higher concentration of algae is produced, however they are much more costly2. Some microalgae species can also grow in the dark using organic carbon as an energy source; cultivation of these heterotrophic microalgae occurs in fermenters and can result in very high lipid production5. Once the biomass is produced, microalgae are harvested from the growth medium. Some harvesting methods are species specific, but in general microalgae are removed through either centrifugation or membrane filtration techniques with or without the use of flocculation6. After solids separation, further processing is carried out for end use applications. The biomass solids are dried to remove water, and then ruptured through mechanical, chemical, or enzymatic action to gain access to the material of interest6. In some cases the dried microalgae is the final product in the form of pellets or powders for human or animal consumption. While these are the traditional methods of harvest and extraction, companies have developed other more cost effective technologies such as pyrolysis of the microalgae biomass to turn it into crude oil and single extraction processes that combine solids separation, dewatering and oil extraction.

MICROALGAE OIL FOR HUMAN CONSUMPTION
Microalgae oil contains a high proportion of the omega-3 fatty acids DHA (docosahexaenoic acid) and EPA (eicospentaenoic acid), which are essential to human health. These oils are cardioprotective due to their effect on triglyceride levels in the body and have shown positive effects on brain development. While the cost of microalgae-based omega-3s is still higher than fish oil it can demand a premium due to the advantages it comes with, including being from a vegetarian non-allergenic source free from concerns of contamination from mercury, dioxins PCPs and other pollutants. Overfishing and sustainability issues are other consumer concerns associated with fish oil that make microalgae an attractive omega-3 alternative. Another advantage of microalgae is that certain species only contain polyunsaturated fatty acids in the form of DHA which can be useful in applications where EPA is not wanted. Infant formula fortification is a high value market for DHA and contributes to almost half of the microalgae based DHA market7. The overall market for omega-3s is still growing and is projected to reach USD 7.32 billion globally by 20208 leaving plenty of room for microalgae based omega-3s to expand beyond their niche market.

DEFATTED MEAL CO-PRODUCT
In order to add value to the production of microalgae for oil-based end products, the defatted biomass is being investigated for use in animal feed as it still contains many of the same nutritional components (e.g., proteins and micronutrients, such as vitamin A, B1, B2, B6, B12, C, E, nicotinate, biotin, folic acid and pantothenic acid) as whole microalgae. However, its high ash content (e.g., salts) has so far been a limiting factor. Recently, Gatrell et al.9 successfully utilized defatted biomass to partially replace corn or soybean meal in poultry and swine feed. The defatted co-product still contains some omega-3 fatty acids and therefore could potentially be used in feed to produce omega-3 rich eggs and milk10. However, more research is needed on the digestibility and bioavailability of the defatted biomass in order for success in the animal feed and human markets11.

OTHER OPPORTUNITIES
As consumer demand for natural food ingredients increases, microalgal pigments are now being used as an alternative to artificial food colorants or for use as supplement powders (e.g., astaxanthin). The benefits of microalgal dyes include their high nutritional value, environmental sustainability and non-toxicity. Microalgae contains a wide range of photosynthetic pigments, comprised of chlorophylls (green), carotenoids (yellow, orange, red), and phycobilins (blue). Pigment production may be controlled through the manipulation of growth conditions, such as in the production of the carotenoid astaxanthin by H. pluvialis. An example of a food pigment currently in use is Lina Blue, produced by Dainippon Ink & Chemicals (Tokyo, Japan). It is sourced from Arthrospira phycocyanins and is used in chewing gum, frozen desserts, candies, beverages and wasabi4.

The cosmetic industry has increasingly been using microalgae in high value cosmetic products such as anti-aging skin care emollients, make-up, sun protection, and hair care due to its bioactive compounds such as specific proteins, polysaccharides and pigments4. Functional claims include tissue repair, skin tightening, and collagen stimulation4. Microalgae are also being used in biopharmaceutical industry for therapeutic protein development. Certain species can act as protein expression systems for the production of recombinant peptides and proteins used in the treatment of diseases such as cancer12. It has been shown that microalgae can produce sufficient levels of therapeutic proteins for commercial viability12,13.

Aside from value-added products, microalgae may be applied in functional roles. Microalgal species have the ability to metabolize water contaminants, allowing wastewater from food and energy production to act as a feedstock14. This has obvious environmental benefits, and also may result in reducing the cost of microalgal biomass production, thereby improving the accessibility of applications15.

INNOVATION IN MICROALGAE RESEARCH
Currently, the majority of innovations in research have been focused on the extraction and refining of high quality oils for human consumption. In addition to the solvent extraction of dried biomass, solvent-free processes, such as cracking through a variety of means in aqueous medium, pulsed electric field treatment and enzyme assisted extraction, are being further explored in order to cost effectively produce these products. The crude oil products can be further refined and in some cases the levels of specific fatty acids are increased through molecular distillation with or without prior esterification. Furthermore, efforts to add value to the defatted biomass are underway, although to a lesser extent, focusing on processing, characterization and product/feed development.

SUMMARY
In recent years the shift from algae for biofuels to algae for food and nutraceutical purposes has occurred. Even though selected Canadian companies have been processing microalgae for nutraceutical purposes since the mid-nineties, the commercial scale production of microalgae for high omega-3 oil, specifically high EPA and DHA, has taken off in the last five years. Several products are currently on the market and even more are under development both in Canada as well as internationally. Besides oil, products such as high protein flour for use as food ingredients and cosmetics, natural astaxanthin and several types of industrial oil are being marketed. The Canadian microalgae industry is predicted to continue to bloom in Canada for years to come.