Mike Dixon is on standby: ready and waiting. He just needs a mission. 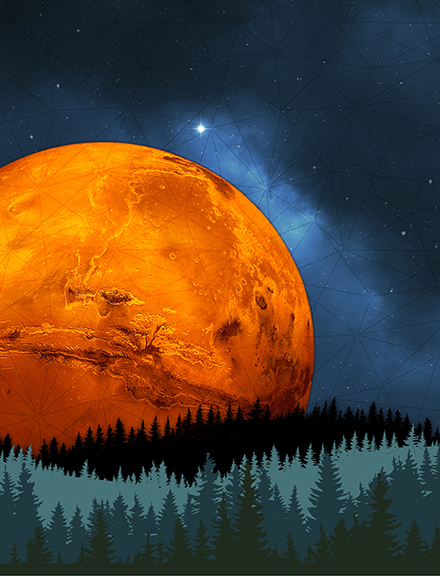 The professor of environmental biology at the University of Guelph and Director of the Controlled Environment Systems Research Facility (CESRF) has been leading cutting-edge research growing plants in controlled environments. His research is pulled by the goal of growing a plant on the moon, with the ultimate goal of a food system that could support a long-term expedition to Mars.

“We’ve had the systems engineered and designed and laid out with our collaborative industry group,” says Dixon. “We have a road map for Canada to grow the first plant on the moon.” Dixon’s research has been able to progress to this stage thanks to the rapid improvements in LED technology over the last five years.

But no one is ready to go.

“We could deploy a plant production system on the moon or Mars tomorrow,” says Dixon. “We have the technology, we know most of the engineering criteria, we just need a mission. Without a mission there’s no money.”

In the meantime, Dixon is trying to find uses for controlled systems on Earth, with the food industry poised as a beneficiary.

Started with a Rose
Before Dixon contemplated a plant production system on Mars, he was using roses as his guinea pig, collaborating with the Ontario greenhouse industry. “Then that evolved into a desire to explore space applications,” he says.

Two decades later, Dixon is highly regarded by the rest of the world and the CESRF represents the world’s leading research venue for technology developments in biological life support. “We accidently arrived at that leadership role because everybody else had sort of backed out of it,” Dixon chuckles. The Russians were the leaders in the 70s before the Americans took over throughout 80s and into the 90s. “We just happened along at a time when there was a gap in the next generation of technology,” says Dixon. “So we kind of took over.” With the most advanced technical setup in the world, including the largest hypobaric chamber configuration of any place on the planet as “nobody else would be silly enough to do it,” the CESRF attracts researchers from NASA and the Kennedy Space Center as well as the European Space Agency. “We are the home of advancing the technology readiness of systems required for the biological life support challenge,” says Dixon.

Food Technology Transfer
While Dixon’s dream is to see the technology used on the Red Planet, its applications for industry is what’s keeping his research going. “[The program] is pulled by the technical requirement to go the moon and grow plants but it is driven entirely by the technology transfer propositions for the agri-food sector here on Earth,” he says.

While it would seem Dixon’s research would be an ideal fit for the agri-food sector, the most successful application at the moment is in the pharmaceutical industry as controlled environments can’t compete economically in the food industry yet. “Here in southern Ontario you can be in Leamington and they have 100 acres under glass of one operation growing tomatoes. There’s no way [controlled environments can compete],” he says. “They have to have that large a scale of production system because the margin on tomatoes is pennies whereas the margin on herceptin or marijuana is huge so they can accept a certain technical risk and higher level of investment and a faster return.”

Thanks to advances with LED lighting, Dixon is much closer to making a real breakthrough that would benefit the agri-food industry on Earth. “Based on the technology as it was five years ago, if you’d have asked me if LEDs would be a viable technical option for artificial lighting in a life support system or in a greenhouse application I would have said no,” he says. LEDs weren’t technically capable and didn’t have the intensity or energy efficiency required but thanks to big market applications, like streetlights, the technology has evolved to such a high level of efficiency that the markets for artificial lighting are getting bigger and the price tag has fallen. “So now we’re just at the stage where our desire to apply artificial lighting in an efficient manner to plant production is met by the technical developments in one of the major environment variables which is light.” 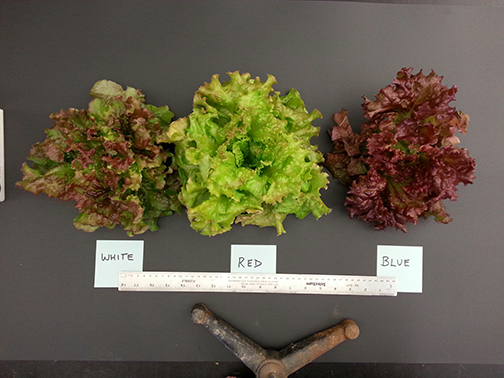 Arctic to the Desert
The developments with LEDs have helped advance an idea that could provide a secure, home grown solution to northern Canada’s food supply issues. “The north of Canada or the deserts of the Middle East are two venues that have different reasons for pursuing controlled environment food production,” says Dixon. “In the Middle East, it’s mostly a food security issue. In Northern Canada, it’s mostly an economic issue.”

While the rest of Canada can rely on its own crops and relatively cheap imports, supplying fresh food to Yellowknife and other remote communities is much more difficult and expensive. Canadian taxpayers subsidize fresh food production to the north through the Nutrition North Canada program (NNCP), which recently replaced the Food Mail program. Under the NNCP, subsidies go to retailers who negotiate freight rates for lower costs. Those savings are supposed to be passed on to consumers. By using Dixon’s controlled environments, northern Canada would be able to grow its own food. “You can put horticultural industry sector in that harsh climate that produces enough strawberries as an example to supply that whole market,” says Dixon. “If you put a system in there and distribute strawberries throughout the Northwest Territories they’re still going to be expensive and they’re still going to require some form of direct or indirect subsidy for food but that subsidy is going to stay in the economy of the Northwest Territories.”

It would create a new industry in the region that would require some elevated levels of technical competence and expertise, and add another element to the economy. “It’s a good plan and we’re struggling,” says Dixon. “I mean everyone nods vigorously and understands, ‘yeah it’s a good idea, let’s do that.’ But it’s going to cost a few bucks to figure it out.”

Dixon might be getting ignored at home but he’s getting some respect abroad. “I had to go to Kuwait to get the funding for the prototype,” he says. “They have exactly the same technical solution to their problem. It’s plus 50 in the desert in Kuwait. It’s minus 50 in the snow bank in Yellowknife and the technical solutions to their food production requirements are almost identical and the LEDs are the key.”

Finding the Recipe
The primary problem Dixon needs funding to fix is how to get non-vegetative plants to bear fruit. 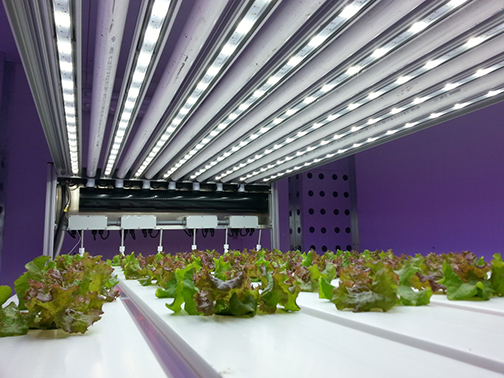 The improvement with LEDs has given rise to a double-edged sword. On one hand, the improvements in LEDs have led to the potential to feed remote communities or grow food on Mars, but now it must be harnessed. “When you have the power to manipulate very precisely the spectral quality of light then you have the responsibility of knowing how to manipulate it. You need to know, ‘What’s the recipe?’ What’s the spectral recipe for cherry tomatoes or strawberries?” asks Dixon. “That’s a generation of research that needs to be done and so we’re just scratching the surface of that now.”

Vegetative crops like lettuce and basil are relatively straightforward. “You give it some red and some blue and let her rip and 25 or 30 days later you’ve got what you need, you have a crop.” Fruiting crops are proving rather more elusive. “The environment control challenge is significantly more sophisticated and requires some thought,” says Dixon. “We have an educated guess. We know where to start. It’s going to be a relatively slow, plodding exercise because imagine the permutations and combinations of even five or six colours.” The main stumbling blocks are plants’ adaptability and the spectral recipe for each breed can be different.

But Dixon is optimistic given the world class technical capabilities that the CESRF offers, which nobody else can match. The CESRF infrastructure that was created for the space program is perfect for evaluating any environment cocktail but especially lighting, including Dixon’s “a little bit silly” LED prototypes. “I can play a tune with the spectral quality of light with my high intensity prototype systems that can generate five times the intensity of the sun,” says Dixon, “but it gives me the technical and research capability to make mistakes and break it at both ends and come away with a very valuable recipe of spectral quality.”

Despite the hurdles, Dixon’s research has come a long way. “We can improve on the sun in terms of a performance of a plant,” he says. “You take a plant and put it in your garden, it performs so-so in a conventional manner. I can take that same plant and put it in this controlled environment and after we learn its response to different spectral qualities at different physiological stages then I can manipulate that.” He can shorten the plant’s time to flower and make it shorter, longer or fatter. “You can do almost anything to it and we’re just slowly learning how to manipulate that spectral quality of light and get the reactions from the plants that are good, bad or indifferent.”

Space Dream
Despite the potential the technology has on Earth, its ultimate purpose is to support life on Mars.

Dixon expects humans to be exploring the Red Planet within the next 20 years, with missions examining the planet’s geology and looking for resources on the surface. In the meantime, Dixon is hoping to go to the moon. “Personally, I’d like to go to the moon first and test drive this stuff because the moon is only three days away and one-week round trip. We can handle that and we can resupply it if we have to and we can make mistakes and learn a few things,” says Dixon.

One of the biggest unknowns about growing plants in space is how crops will react when subjected to galactic cosmic radiation. All that would be required is a robotic mission that puts some Arabidopsis plants in a petri dish in a controlled environment about the size of a bread box on the moon. Telemetry on the data would indicate how plant genetics stand up to the radiation bombardment.

If successful, Dixon wants to incrementally advance the technology using the moon or an asteroid. The International Space Station won’t work because it’s too close and can be resupplied by a shuttle at a much cheaper cost. “[Controlled environments] are not economically feasible compared to simply sending a bag of flour or a loaf of bread to the space station,” he says. “It’s more and more feasible the farther away you go.”

Going to Waste?
The Red Planet is six months away and a two-and-a-half year return because of the juxtaposition of the Earth and Mars in the solar system so the resupply costs would be prohibitive. “Mass and energy are the currency of space travel,” says Dixon. “Not money. Money you spend in the Canadian economy. As an economic engine I can’t imagine anything more useful to the Canadian economy than biting off a great big chunk of the space exploration initiative.”

The government doesn’t see it that way yet. It’s been a 20-year battle for Dixon but he’s not stopping. “Not in my lifetime but eventually they’ll smarten up,” he says.

The rest of the world isn’t standing idly by. There are programs around the world and Dixon guesses the Chinese will be the first in space with a controlled system. “Canada is just full of lost opportunities,” he says. “We’re the home of lost opportunities and brain drains. It’s entirely possible that we’ll screw this up too but we are in a really good position right now. We are deferred to internationally by agencies for specific contributions and exploration agendas. We’re just not ready to deliver yet.”

Showcasing the versatility of Canadian beans 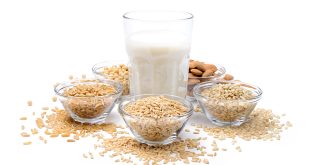 MoOove over milk, plants are taking on the traditional beverage space