MINISTER OF AGRICULTURE, PAT PIMM, IS LOOKING FOR MARKETS AT HOME AND ABROAD TO GROW B.C.’S AGRI-FOOD SHARE TO $14 BILLION 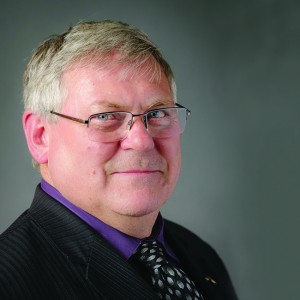 Talking to Pat Pimm, it’s easy to hear the enthusiasm B.C.’s Minister of Agriculture has for his position. There’s a lot of optimism in B.C. with Pimm’s administration hoping to take B.C.’s agri-food sector to the next level. “It’s a very exciting [time] for the agriculture industry and I’m certainly looking forward to it and I’m very excited to be the agriculture minister and the first agriculture minister from the Peace Country so that’s something I’m quite honoured with,” he says. Unfortunately, the initial enthusiasm has been tempered slightly with recent news of his colon cancer diagnosis and allegations he interfered with an independent Agricultural Land Commission tribunal decision. Canadian Food Insights spoke with Pimm before his diagnosis and the accusation to find out his vision for agri-food in B.C.

In broad strokes, what is B.C.’s agri-food strategy?
We’re always working on improving agriculture and giving it a higher profile and a higher focus. Our agri-food strategy aims to take our industry from $10 billion to $14 billion by 2017.

How do you get that $4 billion increase?
We’re always trying to make agriculture more viable. I think one of the important things is we have to make farming more viable for future farmers. We’ve got situations where the average age of the farming community is upwards of 55-years-old and some will say upwards of 60-years-old so we’ve got to get those younger farmers back into the picture and get them thinking about food security for our locals… and raising more awareness throughout the province that when you buy local, when you support local you’re increasing the agriculture industry in the province.

In a recent survey, 85 per cent of British Columbians said they wanted to shop locally. Given there’s an obvious desire to do this, what is the main difficulty in making this a reality?

I think the biggest part of the problem with making it a reality is you have to be able to make a good income from the agriculture industry and a lot of folks in the agriculture industry right now have to work off the farm as well to make ends meet. But, I think we’re seeing some switches there. I think we’re seeing farmers’ markets really starting to expand, more people are using farmers markets and I think that’s a great thing. As part of our Buy Local program we’re trying to put a focus on farmers’ markets. We’re seeing some vast improvements there. I use Kelowna as an example – when it first started 10 years ago, their farmers’ market had about 20 vendors and this year it had upwards of 165 vendors. The day I was in Kelowna last summer there were about 20,000 people in the market on a Saturday. I’m seeing some big expansions there.

What are B.C.’s strengths in agri-food?
The strengths of it are that we are so diverse. We have so many opportunities and I want to look at expanding our markets, and not only our domestic markets with Buy Local, but we want to certainly be able to expand our markets across Canada, certainly with some of our wine industries, but we also want to expand out into the Asian marketplace as well. That will be a big part of attaining the $14 billion goal that we’re looking for. We just opened up cherries into the Asian market last year. Of course, you have to work closely with the federal government to make these things happen and now by opening up cherries into the Asian market the next obvious place to be looking is some of the berry crops and some apples and grapes and those sorts of things. Once you get your foot in the door it’s about expanding on it and that’s what we’re looking to do.

Why are you targeting the Asian market?
We’re targeting all places, actually, but Asia is one of the places that is pretty exciting for us. I use the forest industry as an example. In the early 2000s, about 85 per cent of our product was going to the American marketplace and that’s very similar with our agriculture industry today. Now in the forest industry it’s about 50-50 to Asia and to the United States. That gives you diversity and it allows you to look at two different marketplaces and I think that’s really been a big improvement for our forest industry and I’d really like to pursue those avenues as well. But don’t get me wrong, the United States and that marketplace is huge, as well as are some other world markets.

How would you say B.C. fits into the larger agri-food picture across Canada? 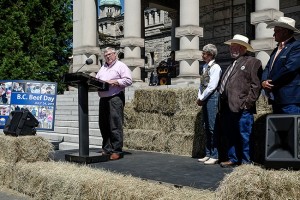 I think we’re well positioned in B.C. but we have to do a few things. We have to find ways of making succession planning work for our families so children on the farm can stay on the farm and work their way through and take over the family farm at some point. I think we’ve done a great job of saving the agricultural land but I don’t think we’ve done a great job or as good a job of saving the agricultural families and keeping them in the game as part of the agriculture industry in the future. That’s certainly going to be part of my focus going forward.

In the fall, the provincial government announced plans to “modernize” the Agricultural Land Commission (ALC) that governs the Agricultural Land Reserve (ALR) in the province. The decision has sparked protests around the country as the organization’s independent status would be removed and it would fall under the umbrella of the Ministry of Agriculture. With all that’s going on, what impact will changes to the ALC and ALR have on agri-food in B.C.?
There are a few things you have to look at and obviously in my mandate letter from the premier, I was challenged by her to make sure the Agriculture Land Reserve and the Commission is working for British Columbia, so I’m looking at that. At this point in time, the mandate of the ALC is to save and protect B.C.’s valuable agricultural land. It doesn’t say anything about saving agriculture families or any kind of succession planning. Certainly, I think we have to make sure we’re looking at the agriculture families in that picture along with the agriculture land. I think the legislation is about 40 years old, times have changed a little bit and we want to certainly make sure our family farming is going to be viable going into the future and that’s the way you’re going to keep the agriculture industry strong.

With numerous discussions and meetings taking place around the province about genetically modified foods, where do you stand on the subject?
The bottom line in that whole discussion is it’s a federally regulated initiative. I was actually at UBC when that discussion was happening and it was quite interesting to see there’s an awful lot of emotion on both sides of that equation and it’s not just everybody was opposed to the genetic engineering process. I think it’s one that’s in its proper position at this time with the federal government. It’s an awful process; it’s a long process to get anything approved through that system. There are also some real benefits to it but there are also some downsides to it as well. So it’s something that has to be monitored closely and I think the federal government is doing a pretty good job at this point in time.

What is your long-term vision for agri-food in B.C.?
Obviously we want to up the production so we can get that $14 billion – if you can get that number up, all of your agriculture industry is going to be benefitting from that. I think the number one thing we have to do is we have to make it viable for the farming families to maintain and stay on the family farm. I think we need to do a lot around the education piece. Quite frankly I think people need to know, the food they’re eating, where did it come from, how it was it generated, how was it built and I think we’ve kind of lost that piece a little bit. I think getting people to think local and buy local is a big part of it as well and most people that I’ve talked to around the province, they actually like the idea of buying local. Most people don’t know that at this point in time, about 50 per cent of the food we’re eating actually has a very strong local component. If we could get that number up to about 60 per cent then it’s going to go a long way to reaching our target of the $14 billion.